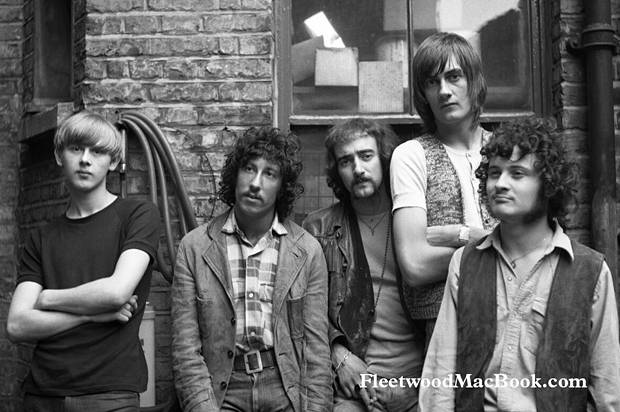 With your descriptions of what the other bandmates brought to Fleetwood Mac, their contributions and their talents, especially when you’re writing about Peter Green, there was such a tenderness to those words that really stood out to me.

It was. A personal thing, which I hope — and just even saying that, I’m realizing you get it — there would be no band without this chap, Peter Green. He was my friend, and remains so. But we’re not super connected, because his life literally took him away, and the way his life went — and that’s a whole another story.

One of the things that was devastatingly great and mind-blowing was when I was talking to Peter for a few hours, and we transcribed some of the things that were said during, really, nearly three hours of talking with him, which I don’t often do. Among thousands of other things, I did want to ask him — and I thought it was relevant for the book — I said “You know, back in the day, when this all came together, why did you ask me to be at your side playing drums?” In the band that he was forming, you know?

I became his right-hand man, and that story goes on through today, in truth. I didn’t preconceive anything. I thought that he would probably, maybe say “Well, I thought you were a really good drummer.” [Laughs.] And he didn’t — he said “Well, you were so sad. You were so sad, and you had broken up with Jenny and you were brokenhearted, and I thought you needed to do something. And that’s what made my mind up that you, out of the choice of . . . ” — maybe two or three people he’d been thinking of. One was an old buddy of his, who I knew.

He said, “I thought you needed it. You needed to pull yourself together.” And I thought that was such a loving statement. It had nothing to do with playing. He did it as a friend to pull me out of being, you know, blue. And that tied in with this title [of the book], in no uncertain terms. And the irony of the title is, if you jump forward thirty years, the whole legacy of this strange band, is all interwoven with love, really, and dysfunctional versions of it as well.