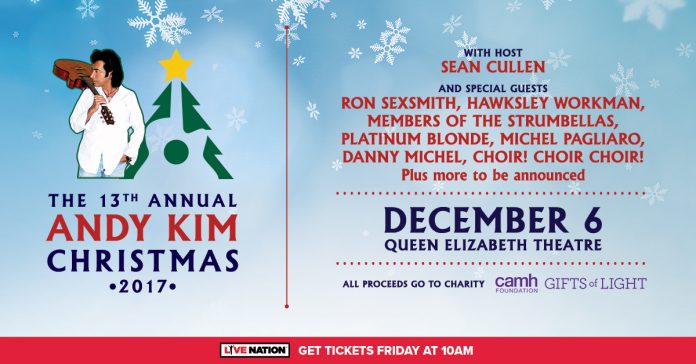 The 13th Annual ANDY KIM CHRISTMAS will be held at the Queen Elizabeth Theatre on December 6th. Tickets go onsale this Wednesday at Noon.

Going into its 13th year, the Andy Kim Christmas has been gathering friends and fans together to celebrate the spirit and generosity of the musical community in Toronto with all proceeds going to charity. The concert event is the brainchild of music legend, and the evening’s host and performer, Andy Kim.

This year, the event is hosted by Sean Cullen, and features performances from Ron Sexsmith, Hawksley Workman, members of The Strumbells, Platinum Blonde, The Sheepdogs, Kayla Diamond, Michel Pagilaro, Choir! Choir! Choir! with more to be announced.

“Lucky 13. As I look back I’m awed by the magic & spirituality of this one idea,” says Andy Kim. “Ask my fellow Canadian Artists to help me help our community. Giving is always the best part of an artists’ life & knowing that we’ve raised over $700,000 through the years makes it all worthwhile.

My relationship with ‘Gifts of Light’ is a very special one & as I continue to see how this program makes a difference in our community, I am proud to again make this my Charity of choice.”

Ron Sexsmith says, “I look forward to the Andy Kim Christmas Show every year…Even more than Christmas itself.”

Born in Montreal, Andy Kim was inspired by the Beatles, Hank Williams, Frank Sinatra, Elvis, Buddy Holly, and Bob Dylan. He found fame in New York City at just 16 years old when he wrote How’d We Ever Get This Way?, the first of nine Billboard Top 40 hits, including #1 songs Rock Me Gently and Sugar, Sugar, one of Billboard’s “Greatest Songs of All Time.” A true Canadian son, Andy has been awarded the country’s top industry honor twice, the JUNO Award for outstanding achievements in the record industry, as well as the Indie Award for Favorite Solo Artist in 2005. Andy is a member of Songwriters Hall of Fame and was inducted into Billboard’s Hit Parade Hall of Fame in 2010. Over his epic career, Andy has sold over 30 million records, with songs covered by music history’s greats, including Wilson Pickett, Tom Jones, Ike & Tina Turner, and Bob Marley. His latest album, It’s Decided, was released in April, 2015 on Arts & Crafts to critical acclaim. In May, 2016, Andy was inducted into the Canadian Music Hall Of Fame. Andy Kim’s music can be heard in hit series such as Showcase’s Ray Donovan and Netflix’s Mindhunters. Pizza Pizza is currently using their own version of Sugar, Sugar in their campaigns to celebrate their 50th Anniversary throughout 2017 and into 2018.