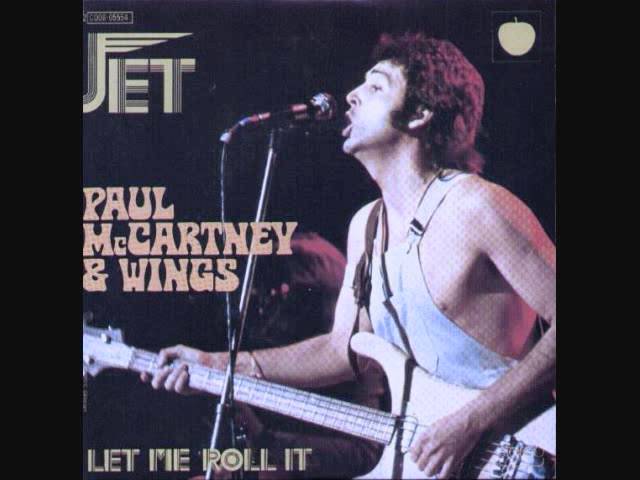 Jet was the first British and American single to be released from Paul McCartney and Wings’ Band on the Run album. The song’s title was inspired by McCartney’s Labrador Retriever dog named “Jet”, as he says in Paul McCartney: In His Own Words.

We’ve got a Labrador puppy who is a runt, the runt of a litter. We bought her along a roadside in a little pet shop, out in the country one day. She was a bit of a wild dog, a wild girl who wouldn’t stay in. We have a big wall around our house in London, and she wouldn’t stay in, she always used to jump the wall. She’d go out on the town for the evening, like Lady and the Tramp. She must have met up with some big black Labrador or something. She came back one day pregnant. She proceeded to walk into the garage and have this litter… Seven little black puppies, perfect little black Labradors, and she’s not black, she’s tan. So we worked out it must have been a black Labrador. What we do is if either of the dogs we have has a litter, we try to keep them for the puppy stage, so we get the best bit of them, and then when they get a bit unmanageable we ask people if they want to have a puppy. So Jet was one of the puppies. We give them all names. We’ve had some great names, there was one puppy called Golden Molasses. I rather like that. Then there was one called Brown Megs, named after a Capitol executive. They’ve all gone now. The people change the names if they don’t like them.