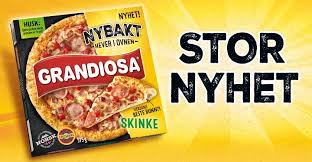 Grandiosa is the most popular brand of frozen pizza in Norway: per Wikipedia, they sell twenty-four million pizzas each year even though the population of Norway is just over 5 million. With offerings like a “Hot Nacho” variety, complete with little baby tortilla chips on top, it’s little wonder why. (By comparison, the most popular brand in the US makes around 90 million pizzas for a population of 325 million.) Grandiosa is so popular that two of their advertising jingles reached #1 on the Norwegian pop charts: “Respekt for Grandiosa” hit in March, 2006 for 2 full months, and “Full Pakke” hit #1 in March, 2007.