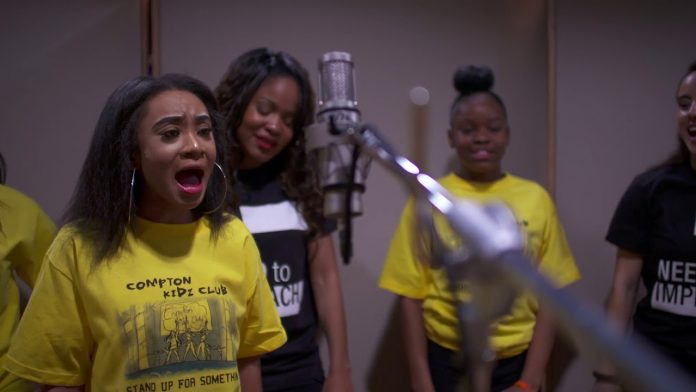 Music students from the Compton Kidz Club today unveiled a new music video—funded by Need to Impeach founder Tom Steyer and directed by arts education advocate Fred Martin—covering Andra Day and Common’s Stand Up For Something to empower and help youth across the country rise up against political oppression and social pressures.

The video features young Black and Latina women who attend the Urban Entertainment Institute, an after-school program in the Compton Unified School District, which is one of the many school districts across the country that would be impacted by the current administration’s agenda against public funding for arts education and after school programs. Filmed throughout Compton, CA, the video includes scenes inspired by real political issues, including Trump’s recent “shithole” remark and its impact on youth, as well as social issues such as drug use, domestic violence, and sexual abuse.

“These young people are a beacon of hope for our future,” said Steyer, who makes a cameo in the video and whose involvement with the Urban Entertainment Institute, a group started by Martin, has helped keep the arts alive for youth in the Compton community. “Despite attacks on funding that further hurt our youth, young people continue to rise up—becoming role models not only for their peers, but for everyone else, including myself. As a country, we must prioritize and invest in our youth by giving them opportunities to maximize their futures.”

Said Martin: “Tom is a prime example of why you should never judge a book by its cover. He is as authentic as anyone can be, and as we say in Compton: ‘he keeps it real!’ It takes a unique person to relate to today’s youth and Tom does it effortlessly. Why? Because he genuinely loves this country and all people in it and truly believes we are all created equal and have certain unalienable rights to life, liberty, and the pursuit of happiness.”

The song, written by Grammy-award winning songwriter Diane Warren, was featured in the 2017 movie “Marshall” and has been nominated for several awards, including a Grammy Award. Steyer and Martin collaborated on the idea for the video to empower young people, while highlighting social issues and giving them a platform to speak their truth on the attacks on communities across the country.

In October 2017, Steyer launched the Need to Impeach campaign through television and social networking ads calling on supporters to sign a petition and demand that Congress remove Trump from power. More than 4.2 million people have since signed the petition, creating a digital army of supporters that many political strategists call one of the most formidable and powerful political tools in the Democratic party. Learn more about Need to Impeach at www.NeedtoImpeach.com.