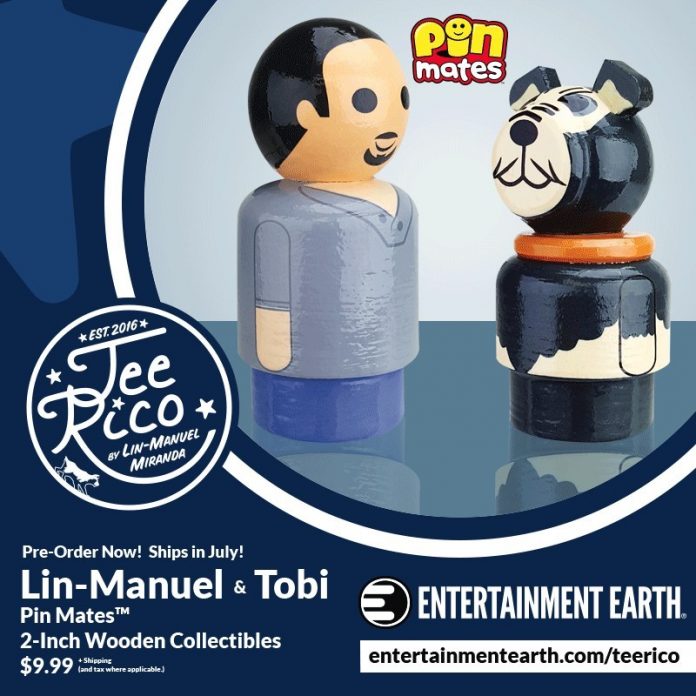 Entertainment Earth – a popular worldwide toys and collectibles destination – announces the signing of a license with TeeRico by Lin-Manuel Miranda (the Hamilton creator’s merchandise brand) to create a toy and collectible product line. The first product announced is Lin-Manuel Miranda and his beloved dog Tobi adorably designed in the highly popular Pin Mates™ brand of wooden figures.

Set to hit shelves in July 2018, the Lin-Manuel and Tobi Pin Mates recently debuted at the TeeRico by Lin-Manuel Miranda booth at BroadwayCon 2018 and will be introduced to the toy industry at the New York Toy Fair, held at the Jacob. K Javits Convention Center February 17 – 20, 2018.

Pin Mates™ debuted with one wooden character at Toy Fair 2016 and has grown into a line offering almost 200 uniquely numbered characters that range from 1 to 6-inches tall, spanning multiple licenses and delighting fans everywhere.

A renowned composer, lyricist, and actor, Lin-Manuel Miranda first hit the Broadway scene 10 years ago with his musical In the Heights and followed that success with the critically acclaimed and Pulitzer Prize and Tony® Award-winning sensation Hamilton: An American Musical. He continues to inspire across many genres of entertainment, including writing GRAMMY Award-winning music for Disney’s Moana and working on new projects such as Disney’s Mary Poppins Returns – set to hit theaters on December 25, 2018. Lin-Manuel Miranda is also working as the creative producer for the film and television adaptation of The Kingkiller Chronicle fantasy novel series by Patrick Rothfuss, being developed by Lionsgate and Showtime. Since Hurricane Maria devastated Puerto Rico on September 20, 2017, Lin-Manuel Miranda has worked tirelessly to raise much needed funds to aid in the island’s relief, recovery and reconstruction efforts by the Hispanic Federation.

A portion of every sale in this collection will be donated to charity.