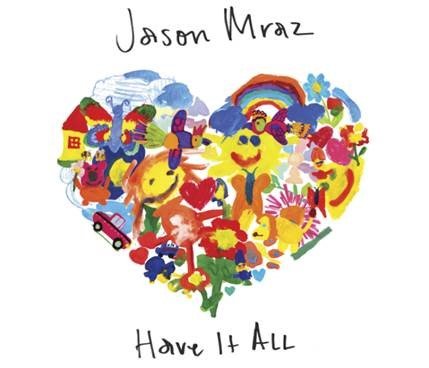 Multiple GRAMMY Award winner Jason Mraz has announced today’s release of his eagerly anticipated new single. “Have It All” is available now at all digital music retailers and streaming services.

“Have It All” was written by Mraz with David Hodges (Christina Perri, Kelly Clarkson) and JKash (Maroon 5, Charlie Puth, Meghan Trainor) in collaboration with his friends in Raining Jane (Mona Tavakoli, Chaska Potter, Mai Bloomfield, and Becky Gebhardt), and produced by Andrew Wells. The track was originally conceived after Mraz received and translated a blessing from a Buddhist monk during a moving visit to Myanmar in 2012. However, current events compelled him to bring “Have It All” fully to life at last.

A dedicated artist and gentleman farmer, Mraz is first and foremost a committed global citizen. His impassioned social activism and philanthropic efforts span from environmental advocacy in regenerative agriculture, to ardent support for human rights. His own Jason Mraz Foundation serves to shine for inclusive arts education and the advancement of equality. Through it all, Jason Mraz continually confirms and celebrates music’s myriad forms and miraculous power, inspiring and delighting his countless fans around the world.

“The world had changed a lot since 2012,” Mraz says. “More people are marching for their freedoms and equality; to be seen and heard. Activism is back in style. I wrote a lot of frustrated, angry, even sad songs between then and now, but nothing I wanted to come forward with; nothing I wanted to sing. ‘Have It All’ stood out as a song with a hopeful message to help me heal and move forward; a song with a message of generosity – the antithesis of despondency; a song bestowed to me by translating a message from a monk. It’s a blessing disguised as a rap song and it’s meant to be paid-forward and shared.”

“Have It All” is joined by a colorful companion video, streaming now at Mraz’s official YouTube channel (WATCH). Directed by longtime collaborator Darren Doane (“I’m Yours,” “Make It Mine,” “Lucky”), the visual captures the song’s bright spirit with a stroll through Mraz’s hometown of Richmond, VA, joined by students from the School of the Performing Arts in the Richmond Community (SPARC), as well as students from the Richmond area Turnaround Arts schools, plus actors Katie Grober (Waitress) and Greg Grunberg (Alias, Heroes).

Prior to “GOOD VIBES,” Mraz – who recently concluded his acclaimed Broadway debut run in the hit musical, Waitress – has set a pair of very special concert appearances, beginning with INSPIRE 2018, presented by Sands Cares and set for May 18th at The Venetian Theatre in Las Vegas, NV. All proceeds from concert ticket sales will be donated to the Marty Hennessy Inspiring Children Foundation and Nevada Partnership for Homeless Youth. Tickets and additional information can be found HERE.

Next up will be the School of the Performing Arts in the Richmond Community’s 6th annual SPARC Presents LIVE ART: LOVE, of which Mraz is not only a performer, but also a sponsor and program advisor, set for June 3rd at Richmond, VA’s Altria Theater. Mraz calls this his “favorite show of the year.” The award-winning mega-concert pairs nationally, internationally, and regionally recognized recording artists with SPARC’s LIVE ART students. This year’s event will see Mraz joined by a truly remarkable line-up that includes Josh Groban, Sara Bareilles, Michael McDonald, Rayvon Owen, René Marie, Raining Jane, Robbie Schaefer, Chris Caswell, and many other local artists, plus a cast of 200 student performers.

Mraz recently celebrated the 15th anniversary of his RIAA platinum certified major label debut album, “WAITING FOR MY ROCKET TO COME,” with the album’s first-time-ever vinyl release. The “WAITING FOR MY ROCKET TO COME” double LP is available now on standard black vinyl at all music retailers carrying vinyl records; an orange vinyl edition is exclusively available via Barnes & Noble (purchase here). All vinyl editions feature expanded artwork by Robert Fisher and Alison Dyer, plus lyrics and new liner notes by Mraz.

As PEOPLE recently noted, “WAITING FOR MY ROCKET TO COME” launched Mraz “from the Southern California coffee house scene into global stardom and the forefront of contemporary American singer-songwriters.” Released October 15th, 2002, “the album indeed propelled Mraz to the forefront of contemporary American pop, fueled by a trio of indelible hit singles in “You And I Both,” “Curbside Prophet,” and the #1 favorite, “The Remedy (I Won’t Worry).” The latter single proved Mraz’s breakthrough, ascending to the top 15 on Billboard’s “Hot 100” while also reaching the top of the “Top 40 Adult Recurrents” chart.