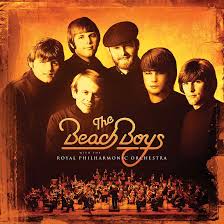 On March 8 and 9, 2018, the Royal Philharmonic Orchestra convened in Studio 2 at Universal Music Group’s Abbey Road Studios in London, the storied room where The Beatles, Pink Floyd, and other legendary artists have recorded some of the world’s most cherished music. There, they recorded new orchestral arrangements to complement The Beach Boys’ classic vocal harmonies from the legendary group’s original recordings. Conducted by Steve Sidwell and Sally Herbert, who also wrote several of the album’s new symphonic arrangements, the orchestra dove into The Beach Boys classics, including the new album’s earliest hit, 1964’s “Fun, Fun, Fun”, and its most recent one, 1988’s “Kokomo”. The album also features the orchestra’s new turns on the signature classics “Good Vibrations”, “California Gils”, “Wouldn’t It Be Nice”, “God Only Knows”, “Sloop John B”, “Help Me, Rhonda”, “In My Room”, “Disney Girls”, and several more. The resulting album, The Beach Boys With The Royal Philharmonic Orchestra, honours The Beach Boys’ artistry and innovation in an inspired new way with the group’s first album collaboration with a full orchestra.

Beach Boys co-founder Brian Wilson says, “I always knew the vocal arrangements I did back in the 1960s would lend themselves perfectly for a symphony and there is no better one in the world than the Royal Philharmonic. I am both proud and humbled by what they have created using our songs and I hope everyone falls in love with it like I have.” Beach Boys co-founder Mike Love says, “This album is one of a kind. I think the fact that the Royal Philharmonic Orchestra has accompanied The Beach Boys with these great arrangements is just a phenomenal thing. It’s a whole other dimension to our music.”

The Beach Boys continue to hold Billboard / Nielsen SoundScan’s record as America’s top-selling band for albums and singles, and they are also the American group with the most Billboard Top 40 chart hits (36). “Good Vibrations”, was inducted into the GRAMMY Hall of Fame® in 1994. ‘Sounds Of Summer: The Very Best Of The Beach Boys’ has achieved triple-Platinum sales status and The SMiLE Sessions, released to worldwide critical acclaim in 2011, was heralded as the year’s Best Reissue by Rolling Stone and earned a GRAMMY Award® for Best Historical Album. That’s Why God Made The Radio, The Beach Boys’ 2012 studio album celebrating their 50th anniversary, debuted at No. 3 on the Billboard 200 albums chart.

Inducted into the Rock and Roll Hall of Fame in 1988 and recipients of The Recording Academy’s Lifetime Achievement Award, The Beach Boys are a beloved American institution that remains iconic around the world.

The story of the Royal Philharmonic Orchestra (RPO) is colorful and dramatic with a reputation worldwide for music-making of the highest quality. In 1946, Sir Thomas Beecham set out to create a world-class ensemble from the finest musicians in the UK. Beecham envisioned an orchestra that would bring the greatest music to audiences across the world and, to this day, Beecham’s legacy lives on. Over the years, the RPO has become a byword for exceptional quality and versatility, undertaking a diverse range of activities from traditional concerts in concert halls to classical spectaculars and ‘cross-over’ concerts in arenas. The Orchestra is London-based and performs regularly at the Royal Albert Hall, Cadogan Hall and Southbank Centre’s Royal Festival Hall, as well as undertaking a busy schedule of UK concerts, international tours, recordings for CD, film and television, and community and education work. For more information, visit www.rpo.co.uk.

The Beach Boys With The Royal Philharmonic Orchestra – Tracklisting:
California Suite
California Girls
Wouldn’t It Be Nice
Fun, Fun, Fun
Don’t Worry Baby
God Only Knows
Sloop John B
Heroes And Villains
Disney Girls
Here Today
In My Room
Kokomo
The Warmth Of The Sun
Darlin’
Help Me, Rhonda
You Still Believe In Me
Good Vibrations