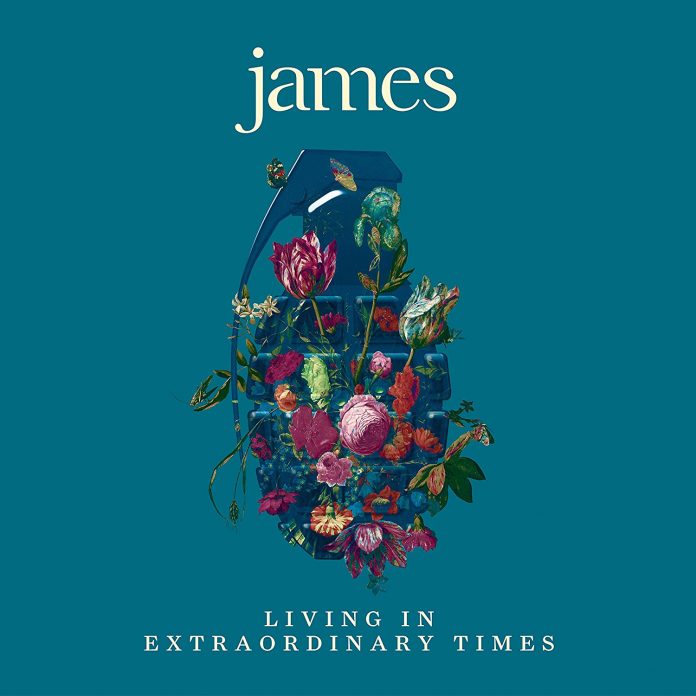 James are proud to announce the release of their new album Living In Extraordinary Times. Released on 3rd August, the album is produced by Mercury and Brit Award winner Charlie Andrew (whose previous work includes alt-J and Wolf Alice) and rising star Beni Giles.

Living In Extraordinary Times follows the release of their recent Better Than That EP, the band’s first new music since their hugely successful 2016 album ‘Girl at the End of the World’, which debuted at number two in the UK album charts, second only to Adele – their highest debut entry in nearly twenty years. Hank, the last track from the Better than that EP which is also included on the new album is released today.

This is the band’s 15th studio album, and delivers the same vigour and urgency as its predecessors, a fusion of social commentary and personal reflection, covering everything from the current political climate in America in frustration-charged ‘Hank’ – “This crack heads tiny fingers, Accusing you of what he’ll do, White fascists in the white house, More beetroot in your Russian stew” – to lonesome Father’s Day in heartfelt ‘Coming Home (Pt. 2)’, the latter of which also features keyboard from long-time collaborator Brian Eno.

Tim Booth said, “we knew something was up when Leicester city won the league then Brexit, then Trump. It is as if we’d slipped into an alternate reality, a Philip K Dick reality. We are living in extraordinary times.”

The album started life during jam sessions at Sheffield’s Yellow Arch Studios and finished recording at Iguana Studios in Brixton. Beni was already working with the band on creating a new rhythmical approach when Charlie joined the project after being blown away by the band live. “This album is full of big tunes,” Andrew states. “Tim and the guys are all very good at writing huge hooks. There’s some really big, energetic tracks and some nice, chilled ones. There’s some monstrous tracks, like ‘Hank’, which is just vast with layers and layers of drums.”