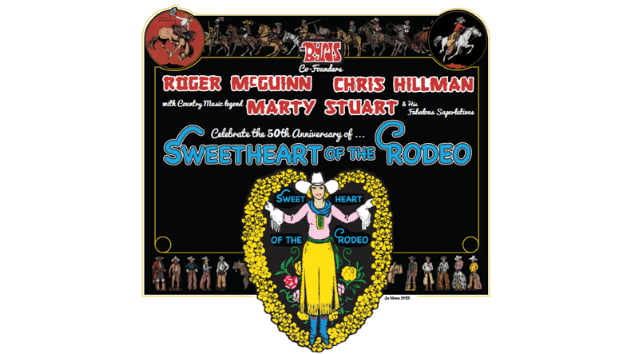 Founding Byrds members Roger McGuinn and Chris Hillman will reunite for a U.S. tour in celebration of the 50th anniversary of their old band’s influential country-rock album, Sweetheart of the Rodeo, which was released in August of 1968. McGuinn and Hillman will be backed on the trek by veteran country singer/guitarist Marty Stuart and his group the Fabulous Superlatives.

So far, five dates for the tour have been confirmed, spanning from a July 27 show in Los Angeles through an October 3 concert in Akron, Ohio. Additional performances will be announced soon.

In advance of the trek, McGuinn and Hillman will perform a few songs from the album on June 6 at Stuart’s 17th annual Late Night Jam event at Nashville’s famed Ryman Auditorium. Stuart cites Sweetheart of the Rodeo as a huge influence on his own music, and he plays a 1954 Fender Telecaster originally owned by late country-rock guitar great Clarence White, who was a member of The Byrds from 1968 to 1973.

Sweetheart of the Rodeo was The Byrds’ sixth album overall and the only one to feature singer/guitarist/songwriter Gram Parsons, who joined the group after the departure of founding member David Crosby. The country-flavored album featured mostly covers, including songs by Bob Dylan, Woody Guthrie, Merle Haggard and The Louvin Brothers. A number of respected Nashville session musicians contributed to the record, including White.

“I can’t wait to be on stage with Chris Hillman, Marty Stuart and those Fabulous Superlatives!” says McGuinn in a statement. “We’re all looking forward to taking the fans through the back pages of the recording. The concert will include songs that led up to that groundbreaking trip to Nashville and all the songs from the album.”

Here are all of the confirmed tour dates: