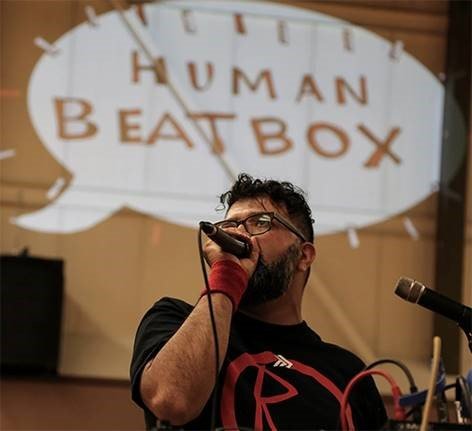 When it comes to entertaining audiences of all ages, Canadian musician RupLoops has the job on lock.

The brainchild of Vancouver-based Rup Sidhu, RupLoops is known for delivering highly engaging, interactive experiences using vocal percussion, rhythmic, looping rhymes and an arsenal of eclectic instruments from around the world.

His newest release — The Human Radio — is no exception to his long-standing, critically-acclaimed and highly sought after skills.

The result is as unique as the day is new.

Through a mix of hip-hop, blues, and bhangra, The Human Radio welcomes themes of all things identity: home, culture, justice, dignity, and celebration, to name a few. Between “Yaar (Friend)”, a bhangra banger performed in both Punjabi and English, “Compass”, a bouncy, inviting reggae rouser, all the way to “Moon Dreams”, his ‘nap time’ inspired closer, the 14-song release is a globally-inspired must-hear track after track.

Welcomed on stage around the world as an interdisciplinary artist, musician, producer, and composer, Rup is credited for delving deeper into the opportunity of educating as he entertains through his passion for blending and amplifying intercultural sounds. “(He) delights, entertains, and draws his audience in,” says Katherine Carol, Artistic Director of the Vancouver International Children’s Festival. “(It’s) outstanding! His shows are fabulous!”

“This was more than just a performance,” agrees Sharon Hoffinger, a teacher in Surrey, British Columbia. “Rup integrates technology, culture, emotion, creativity, and even some music theory into an experience where all audience members were fully engaged!”

“Let’s investigate the brilliant design of our auditory and aural systems that allow us to create and listen to music,” Rup invites, regarding his new release. “Through body percussion and beatboxing, I demonstrate how the human form is indeed a musical instrument.

“For almost a century, we have been tuning into radios to be informed and entertained,” he explains. “The Human Radio takes you on a journey of sound exploring anatomy, geography, and culture.”

The Human Radio is available now.