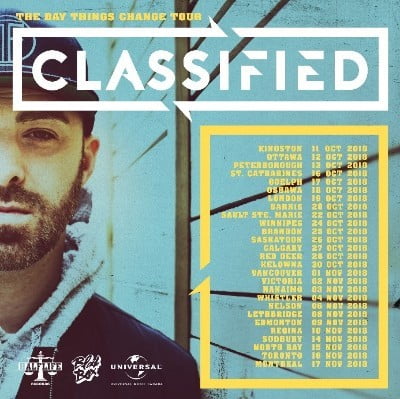 JUNO Award winning, multi-platinum Canadian hip-hop artist and producer, Classified announced today that he’ll embark on a 27-date national headlining tour across Canada in support of his latest release – the acclaimed new EP “Tomorrow Could Be…” Kicking off in Kingston, Ontario on October 11th, The Day Things Change Tour will see stops across Ontario, Manitoba, Saskatchewan, Alberta and British Columbia before heading east to Quebec.

The relentless hit maker also confirmed the release of the video for the EP’s “Damn Right” as well.

Classified’s “Tomorrow Could Be…” EP honours female empowerment, pays tribute to missing and murdered Indigenous women and lends a voice to children and women who have been abused among other themes. With a humble determination, Classified (aka Luke Boyd), brings attention to a number of important ‘modern day’ topics and issues throughout the EP.

With an inherent and candid ability to break down the barrier between performer and audience, Classified is one of Canada’s most respected and successful rap artists and producers. His self-titled 2013 release debuted at No. 1 on the Canadian Nielsen Soundscan Chart and has sold over 1 million singles and is certified 2x Platinum. Additionally, the album boasts two Top 10 singles including the 5x Platinum “Inner Ninja” featuring David Myles and thePlatinum certified “3 Foot Tall”. As one of the most influential hip-hop artists in Canada with over 100 million streams globally, the multiple JUNO Award winner hosted the 2014 JUNO Awards and has a combined 24 nominations and 8 wins between the MuchMusic Video Awards, JUNO Awards, and East Coast Music Awards.