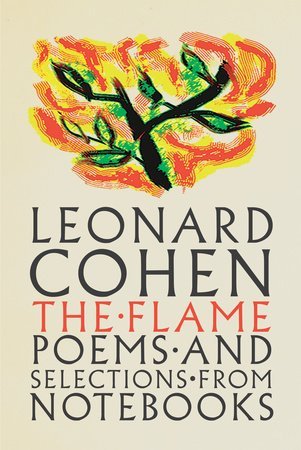 On October 8, 2018, Penguin Books will be releasing The Flame, a stunning collection of Leonard Cohen’s last poems, selected and ordered by the author in the final months of his life. It features lyrics, prose pieces, and illustrations, and the book also contains an extensive selection from Cohen’s notebooks, which he kept in poetic form throughout his life, and offers an unprecedentedly intimate look inside the life and mind of a singular artist and thinker.

This will be the final work from Cohen, Canada’s most celebrated poet and an artist whose audience spans generations and whose work is known and loved throughout the world.

An enormously powerful final chapter in Cohen’s storied literary career, The Flame showca ses the full range of Leonard Cohen’s lyricism, from the exquisitely transcendent to the darkly funny. By turns devastatingly sad and winningly strange, these are the works of a poet and lyricist who has plumbed the depths of our darkest questions and come up wanting, yearning for more.

Leonard Cohen’s artistic career began in 1956 with the publication of his first book of poetry, Let Us Compare Mythologies. He published two novels, The Favourite Game and Beautiful Losers, and ten books of poetry, most recently Stranger Music: Selected Poems and Songs and Book of Longing. During a recording career that spanned almost fifty years, he released fourteen studio albums, the last of which, You Want It Darker, was released in 2016. Cohen was inducted into the Rock and Roll Hall of Fame in 2008, received a Grammy Lifetime Achievement Award in 2010, and was awarded the Glenn Gould Prize in 2011. He died on November 7, 2016.