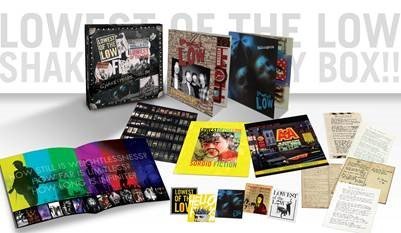 Lowest Of The Low have announced the release of their massive box set, Shakespeare My Box!!. The band’s career retrospective will launch on November 21, 2018 exclusively through the band’s website.

Shakespeare My Box!! is a veritable treasure trove for fans that includes all four of the Lowest Of The Low albums on vinyl (a first for Hallucigencia and Sordid Fiction) and a fifth album of unreleased tracks, rarities and outtakes called Thrifty Thrifty Thrifty. The box also includes a 24-page full colour book, handwritten lyrics, a poster and stickers.

To celebrate the release of Shakespeare My Box!!, the band is playing two sets at the Dakota in Toronto on November 21. To ensure an unforgettable evening shared with super fans, only those who buy the box set will have access to the $25 Dakota tickets (1 pair per box). Concert goers will also have a chance to win specialty prizes at the shows.

Lowest Of The Low emerged from the ashes of Toronto’s 1980’s punk rock scene with founders Ron Hawkins and David Alexander surviving many sweaty nights sharing stages and rubbing elbows with the scene’s hoi polloi as Social Insecurity. By the early 90’s Lowest Of The Low were playing legendary shows, performing socially-conscious folk-rock assembled from character sketches and journal entries in Ron’s ever-present notebook as he wandered the streets of Toronto.

Their 1991 debut, Shakespeare My Butt…, found its audience and quickly became a best seller flying off the indie shelves at local record stores. The success brought industry recognition that the band turned its back on, rejecting lucrative offers, including support slots on major tours with Bryan Adams, Blue Rodeo and Barenaked Ladies. The band clung to their independence and took their show on the road, shaking the foundations of bars, nightclubs and university pubs, building an unforgivingly loyal following.

In 1994 they released Hallucigenia but a tough recording process followed by a grueling tour pace tore the band apart and in the Autumn of ’94 the band shut it down so quickly that fans never had a chance to say goodbye. The band re-emerged in 2001 playing several reunion shows and releasing the live/studio hybrid Nothing Short Of A Bullet. Sordid Fiction, their third full studio album came out in 2004. Their latest album, Do The Right Now was released in 2017.

Lowest Of The Low were inducted into the Canadian Indie Music Hall of Fame in 2008; Shakespeare My Butt… was thrice voted Top 10 Canadian of All Time by the readers of Chart Magazine while Ron Hawkins has twice been named NOW Magazine’s Songwriter of the Year – not that any of that stuff is important to them.

Thrifty Thrifty Thrifty tracklisting:
Side A
01 The Kids Are All Wrong (Single)
02 Darkhorse (Demo)
03 Lines And Wires (DVD Soundtrack)
04 Letter From Bilbao (Live)
05 (These Are) The Lives And Times (Single)
06 For The Hand Of Magdelena (Live)
07 Lazy Days *