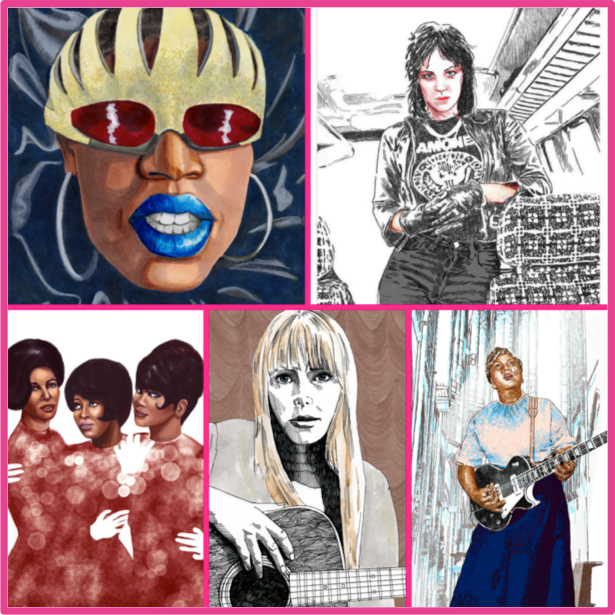 From Bessie Smith and The Supremes to Joan Baez, Aretha Franklin, Madonna, Beyoncé, Amy Winehouse, Dolly Parton, Sleater-Kinney, Taylor Swift, and scores more, women have played an essential and undeniable role in the evolution of popular music including blues, rock and roll, country, folk, glam rock, punk, and hip hop. Today, in a world traditionally dominated by male artists, women have a stronger influence on popular music than ever before. In WOMEN WHO ROCK (Black Dog & Leventhal; October 9, 2018), writer and professor of journalism Evelyn McDonnell leads a team of noted women rock writers and pundits in an all-out celebration of more than 100 of the greatest female musicians.

Organized chronologically, the book profiles each artist and places her in the context of both her genre and the musical world at large. Sidebars throughout recall key moments that shaped both the trajectory of music and how those moments influenced or were influenced by women artists.

With a stunning, specially commissioned, full-color illustrated portrait of every musician and group by women artists, WOMEN WHO ROCK will be the long-awaited gift book for every music fan, feminist, and female rocker, young and old.

Evelyn McDonnell is associate professor of journalism at Loyola Marymount University. She has been writing about popular culture and society for more than 20 years. She is the author of four books: Queens of Noise: The Real Story of the Runaways, Mamarama: A Memoir of Sex, Kids and Rock ‘n’ Roll, Army of She: Icelandic, Iconoclastic, Irrepressible Bjork and Rent by Jonathan Larson. She coedited the anthologies Rock She Wrote: Women Write About Rock, Pop and Rap and Stars Don’t Stand Still in the Sky: Music and Myth. She lives in Los Angeles.