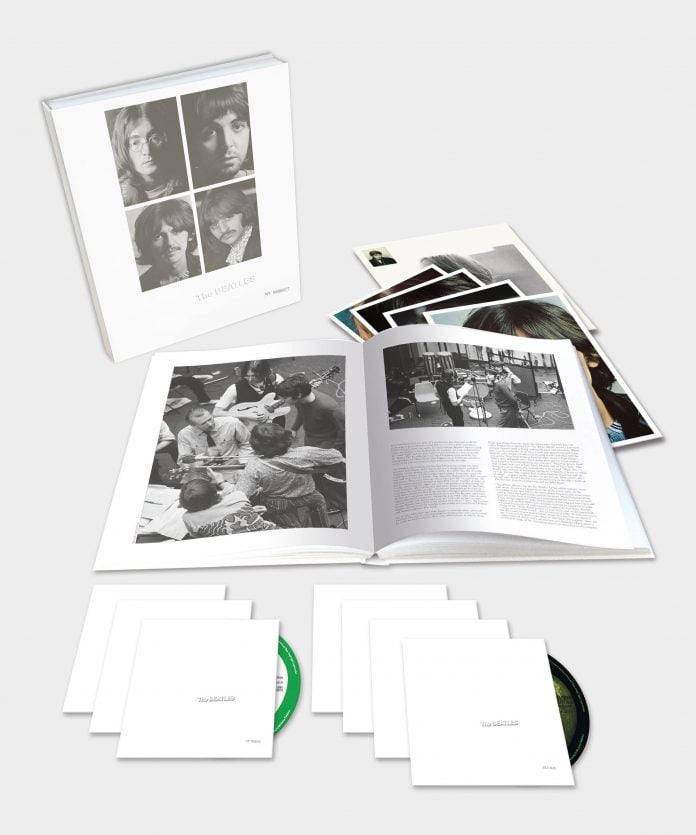 In November 1968, millions of double LPs were shipped to record stores worldwide ahead of that tumultuous year’s most anticipated music event: the November 22nd release of The BEATLES (soon to be better known as ‘The White Album’). With their ninth studio album, The Beatles took the world on a whole new trip, side one blasting off with the exhilarating rush of a screaming jet escorting Paul McCartney’s punchy, exuberant vocals on “Back In The U.S.S.R.” “Dear Prudence” came next, John Lennon warmly beckoning his friend and all of us to “look around.” George Harrison imparted timeless wisdom in “While My Guitar Gently Weeps,” singing, “With every mistake we must surely be learning.” Ringo Starr’s “Don’t Pass Me By” marked his first solo songwriting credit on a Beatles album. For 50 years, ‘The White Album’ has invited its listeners to venture forth and explore the breadth and ambition of its music, delighting and inspiring each new generation in turn. On November 9, The Beatles will release a suite of lavishly presented ‘White Album’ packages (Apple Corps Ltd./Capitol/UMe). The album’s 30 tracks are newly mixed by producer Giles Martin and mix engineer Sam Okell in stereo and 5.1 surround audio, joined by 27 early acoustic demos and 50 session takes, most of which are previously unreleased in any form.

This is the first time The BEATLES (‘White Album’) has been remixed and presented with additional demos and session recordings. The album’s sweeping new edition follows 2017’s universally acclaimed Sgt. Pepper’s Lonely Hearts Club Band Anniversary Edition releases. To create the new stereo and 5.1 surround audio mixes for ‘The White Album,’ Martin and Okell worked with an expert team of engineers and audio restoration specialists at Abbey Road Studios in London. All the new ‘White Album’ releases include Martin’s new stereo album mix, sourced directly from the original four-track and eight-track session tapes. Martin’s new mix is guided by the album’s original stereo mix produced by his father, George Martin.

“In remixing ‘The White Album,’ we’ve tried to bring you as close as possible to The Beatles in the studio,” explains Giles Martin in his written introduction for the new edition. “We’ve peeled back the layers of the ‘Glass Onion’ with the hope of immersing old and new listeners into one of the most diverse and inspiring albums ever made.”

The BEATLES (‘White Album’) releases include:

The minimalist artwork for ‘The White Album’ was created by artist Richard Hamilton, one of Britain’s leading figures in the creation and rise of pop art. The top-loading gatefold sleeve’s stark white exterior had ‘The BEATLES’ embossed on the front and printed on the spine with the album’s catalogue number. Early copies of ‘The White Album’ were also individually numbered on the front, which has also been done for the new edition’s Super Deluxe package. The set’s six CDs and Blu-ray disc are housed in a slipsleeved 164-page hardbound book, with pull-out reproductions of the original album’s four glossy color portrait photographs of John, Paul, George, and Ringo, as well as the album’s large fold-out poster with a photo collage on one side and lyrics on the other. The beautiful book is illustrated with rare photographs, reproductions of handwritten and notated lyrics, previously unpublished photos of recording sheets and tape boxes, and reproduced original ‘White Album’ print ads. The book’s comprehensive written pieces include new introductions by Paul McCartney and Giles Martin, and in-depth chapters covering track-by-track details and session notes reflecting The Beatles’ year between the release of ‘Sgt. Pepper’ and recording sessions for ‘The White Album,’ the band’s July 28 1968 “Mad Day Out” photo shoot in locations around London, the album artwork, the lead-up and execution of the album’s blockbuster release, and its far-ranging influence, written by Beatles historian, author and radio producer Kevin Howlett; journalist and author John Harris; and Tate Britain’s Senior Curator of Modern and Contemporary Art Andrew Wilson.

The Deluxe 3CD is presented in an embossed digipak with the fold-out poster and portrait photos, plus a 24-page booklet abridged from the Super Deluxe book. Presented in a lift-top box with a four-page booklet, the limited edition Deluxe 4LP vinyl set presents the 2LP album in a faithful, embossed reproduction of its original gatefold sleeve with the fold-out poster and portrait photos, paired with the 2LP Esher Demos in an embossed gatefold sleeve.

Much of the initial songwriting for ‘The White Album’ was done in Rishikesh, India between February and April 1968, when John Lennon, Paul McCartney, George Harrison, and Ringo Starr joined a course at the Maharishi’s Academy of Transcendental Meditation. In a postcard to Ringo, who had returned to England before the others, John wrote, “we’ve got about two L.P.s worth of songs now so get your drums out.”

During the last week of May, The Beatles gathered at George’s house in Esher, Surrey, where they recorded acoustic demos for 27 songs. Known as the Esher Demos, all 27 recordings are included in the new edition’s Deluxe and Super Deluxe packages, sourced from the original four-track tapes. Twenty-one of the demoed songs were recorded during the subsequent studio sessions, and 19 were ultimately finished and included on ‘The White Album.’

The Beatles’ studio sessions for The BEATLES (‘White Album’) began on May 30, 1968 at Abbey Road Studios. In the 20 weeks that followed, The Beatles devoted most of their time to sessions there for the new album, with some recording also done at Trident Studios. The final session for the album took place at Abbey Road on October 16, a 24-hour marathon with producer George Martin to sequence the double album’s four sides and to complete edits and cross-fades between its songs. The Beatles’ approach to recording for ‘The White Album’ was quite different from what they had done for ‘Sgt. Pepper.’ Rather than layering individually overdubbed parts on a multi-track tape, many of the ‘White Album’ session takes were recorded to four-track and eight-track tape as group performances with a live lead vocal. The Beatles often recorded take after take for a song, as evidenced by the Super Deluxe set’s Take 102 for “Not Guilty,” a song that was not included on the album. This live-take recording style resulted in a less intricately structured, more unbridled album that would shift the course of rock music and cut a path for punk and indie rock.

The Beatles’ newly adopted method of recording all through the night was time consuming and exhausting for their producer, George Martin. Martin had other duties, including his management of AIR (Associated Independent Recording), and he had also composed the orchestral score for The Beatles’ animated feature film, Yellow Submarine, released in July 1968. After the first three months of ‘White Album’ sessions, Martin took a three-week holiday from the studio, entrusting the control room to his young assistant Chris Thomas and balance engineer Ken Scott. Scott had taken the place of engineer Geoff Emerick, who left the sessions in mid-July. On August 22, Ringo Starr also left the sessions, returning 11 days later to find his drum kit adorned with flowers from his bandmates. While the sessions’ four and a half months of long hours and many takes did spark occasional friction in the studio, the session recordings reveal the closeness, camaraderie, and collaborative strengths within the band, as well as with George Martin.

The BEATLES (‘White Album’) was the first Beatles album to be released on the group’s own Apple Records label. Issued in both stereo and mono for the U.K. and in stereo for the U.S., the double album was an immediate bestseller, entering the British chart at number one and remaining there for eight of the 22 weeks it was listed. ‘The White Album’ also debuted at number one on the U.S. chart, holding the top spot for nine weeks of its initial 65-week chart run. In his glowing ‘White Album’ review for Rolling Stone, the magazine’s co-founder Jann Wenner declared: “It is the best album they have ever released, and only The Beatles are capable of making a better one.” In the U.S., ‘The White Album’ is 19-times platinum-certified by the RIAA and in 2000, it was inducted into the Recording Academy’s GRAMMY® Hall of Fame, recognizing “recordings of lasting qualitative or historical significance.”

CD 1: The BEATLES (‘White Album’) 2018 Stereo Mix
Back in the U.S.S.R.
Dear Prudence
Glass Onion
Ob-La-Di, Ob-La-Da
Wild Honey Pie
The Continuing Story of Bungalow Bill
While My Guitar Gently Weeps
Happiness is a Warm Gun
Martha My Dear
I’m so tired
Blackbird
Piggies
Rocky Raccoon
Don’t Pass Me By
Why don’t we do it in the road?
I Will
Julia