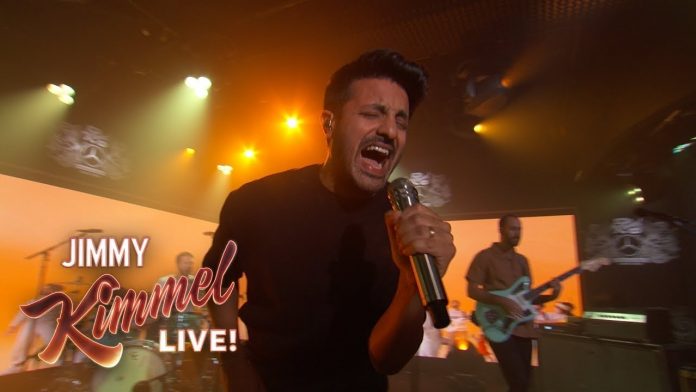 Today, Young the Giant announce dates for their 2019 Mirror Master Tour in support of the new full-length album of the same name, released earlier this month via Elektra Records. Mirror Master includes recently released tracks “Simplify” and “Call Me Back”, along with the musing single “Superposition”. In addition to the newly announced show dates, the band is currently touring this fall across the US with LIGHTS as main support.

Tickets for the Mirror Master Tour will go on sale to the public Friday, October 26 at 10am local time.

Recently, Young the Giant delivered “soaring” (Billboard) performances of “Superposition” and “Simplify” on Jimmy Kimmel Live!, and also appeared on The Late Show with Stephen Colbert this summer with a powerful rendition of “Simplify”.

Describing the overall thesis for Mirror Master, vocalist Sameer Gadhia explains, “Within one single day, we’re all so many different people. Especially with the use of social media, we’re not just living in the now—we’re living on several different timelines simultaneously. A lot of the album came from thinking about how we have all these separations within ourselves that allow us to go about our day. At a time when everyone wants to put each other in a box—culturally, socially, musically—we wanted to show that there are a multitude of reflections inside everything. We don’t have to be a certain thing; we can contradict ourselves and show all these different sides of who we are.”

Since the band’s 2010 inception, Young the Giant has made a name for itself in rock as the ‘thinking man’s band,’ winning over fans, radio, and press with their incendiary live shows, strong musicianship, and poignant lyrics. Following 2016’s critically-acclaimed Home of the Strange, Mirror Master promises to continue ascending into consciousness, though this time with a heavy focus on personal self-awareness and growth.

Mirror Master finds Young the Giant in a transitional period for America, not only as a culture (for their former album Home of the Strange, NPR’s Alisa Chang had an in-depth conversation with Gadhia about the ‘modern immigration story’, available to read here), but also technologically. The band members have become increasingly aware of society’s attachment to social media, cellphones, and elevated, sometimes fabricated, self-portrayals on the internet.

With the new album, the band forgoes the technological obsession and, in an almost meditative way, examines one’s relationship with the “self” to instead express a genuine identity.

“Something we want to get across with the album is the idea of taking authorship of your life,” continues Gadhia. “Even though it may all be an illusion, there’s solace in that illusion. Because if you have control of anything at all, it’s your own reflection, how you treat people and how you walk through this life. So if you’re an Indian kid and your parents want you to be a doctor or lawyer or engineer, and you just want to make music with your friends, then do that. Don’t let people feed you what they want you to think. Do what makes you happy, and realize and that all is good and all is horrible, and everything else in between.”