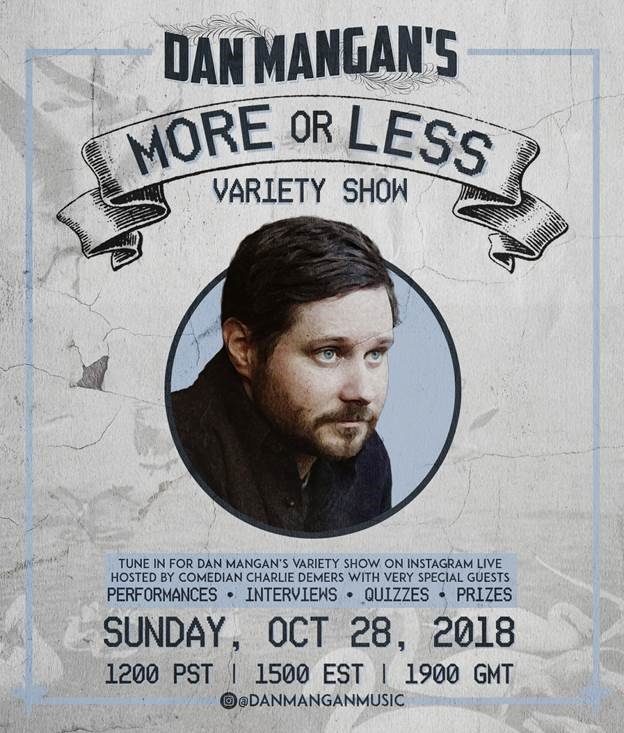 On Sunday October 28th, a few days before the release of his upcoming LP, More or Less, Dan Mangan will launch a live, split-screen, multi-stage variety show hosted by comedian Charlie Demers. The show will take place on Mangan’s Instagram Live account and will include live performances, interviews, game show quizzes, and prizes. Fans and viewers can control the entertainment by demanding ‘MORE’ or ‘LESS’ of what they are watching.

Dan will also be joined by a packed roster of special guests including comedians Nima Gholamipour, Carla Mah, Ronald Dario, and Colin Cowan. Other guests will include everyone from CBC’s Grant Lawrence to Dan’s own mother, Louise Mangan.

“It’s like an album release party online,” says Mangan. “It also might be a trainwreck, in which case there’s even more incentive to scope it out.” Watch Mangan and friends experiment with the highs and lows of live television on his Instagram Live at 3:00pmET on Sunday, October 28th.

More or Less is about “witnessing birth, and in some ways rebirth,” says Mangan. “It’s about feeling disconnected from a popular identity and becoming acclimated to a new one. It’s about raising kids in a turbulent world. It’s about unanswerable questions and kindness and friendship and fear.”

This January, Mangan will take to the road throughout Canada for a nation-wide tour, starting in Newfoundland making his way back home to BC. Full tour dates can be found below, with more dates to be added in the near future. Mangan has already been on tour with Stars and Kaleo earlier this year and will continue on with Snow Patrol in North America and Laura Gibson in Europe this fall.

Recently, Mangan shared the first two episodes of his More or Less Songwriting Series. Released over the next twelve months, Mangan and Stuart Gillies take you behind the scenes of his craft to discuss the songs and events that have had the biggest impact on him as a songwriter. The playlist of songs will also be featured on Spotify and Apple Music. In the first two episodes, Mangan discusses the process behind “So Much For Everyone”, a track from his first LP, Postcards And Daydreaming, and “Just Fear”, his most recent single from the upcoming More or Less.