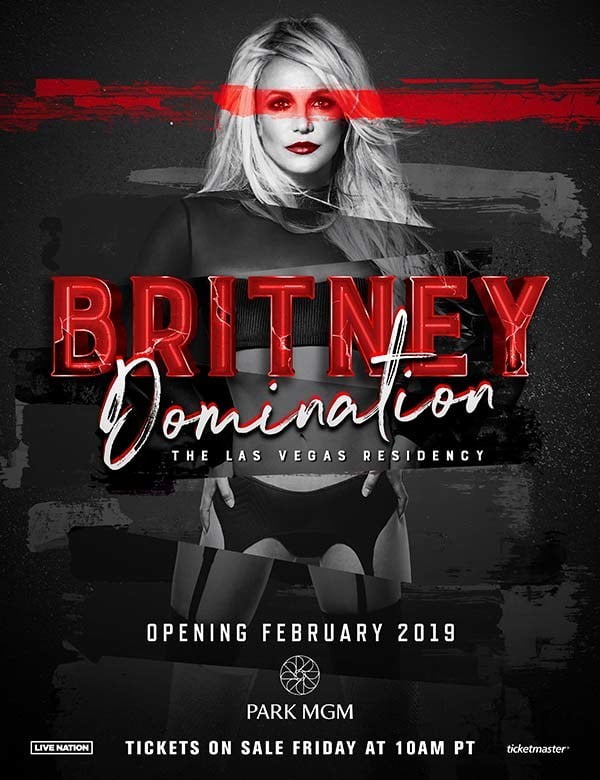 Multi-platinum, GRAMMY Award-winning superstar Britney Spears will launch her new spectacular residency, “Britney: Domination,” at Park Theater at the new Park MGM resort in February 2019. Citi is proud to join Britney Spears and Park MGM as the official credit card of this residency, presented in partnership by MGM Resorts International and Live Nation.

The first major Pop Star to have a Las Vegas residency is back! Britney’s new show will embody her strong, take-charge attitude when she returns to the city with her new show, “Britney: Domination.” Designed to give her fans and concertgoers an immersive experience, this show will bring them closer to the excitement than ever before as they party, dance and sing along to her amazing catalogue of hit songs.

“I am so happy to be returning to my second home – Las Vegas!” said Britney. “I’m working on a brand-new show and I’m so excited for my fans to see it! It’s going to be so much fun being back on stage and I can’t wait to perform at Park Theater.”

Tickets to “Britney: Domination” at Park MGM start at $79 (including applicable service charges and fees) and go on sale Friday, Oct. 26 at 10 a.m. PT. Tickets can be purchased online at Ticketmaster.com or by calling the MGM Resorts International Call Center at (877) 795-2565. For more show and ticket information, visit ParkTheaterLV.com.

Members of the Britney Spears Fan Club will receive access to an exclusive presale from Friday, Oct. 19 at 10 a.m. PT to Thursday, Oct. 25 at 10 p.m. PT. For more information, visit BritneySpears.com.

Citi is the official presale credit card of Britney Spears’ residency at Park Theater. As such, Citi cardmembers will have access to purchase presale tickets from Monday, Oct. 22 at 10 a.m. PT to Thursday, Oct. 25 at 10 p.m. PT thru Citi’s Private Pass program. For complete presale details, visit citiprivatepass.com.

Members of M life Rewards, MGM Resorts’ loyalty program, as well as Live Nation and Ticketmaster customers will receive access to a presale scheduled from Wednesday, Oct. 24 at 10 a.m. PT to Thursday, Oct. 25 at 10 p.m. PT. To join the M life Rewards program or for more information, visit mlife.com.

Britney’s record-breaking, four-year headlining residency, “Britney: Piece of Me” received rave reviews from critics and fans alike when it opened in Las Vegas in 2013. As the first contemporary superstar resident in the city, Britney played a pivotal role in revitalizing the modern era of entertainment in Las Vegas. With over 250 shows, the record-setting residency was sold out on a regular basis, generating more than $140 million gross revenue and selling nearly 1 million tickets.

Britney Spears is one of the most celebrated entertainers in the history of pop with nearly 150 million records sold worldwide, multiple platinum records, and countless awards and accolades. She has sold more than 70 million albums and hit singles in the U.S. alone. Spears quickly rose to stardom and became a household name as a teenager when she released her first single “…Baby One More Time,” a Billboard Hot 100 No. 1 smash and international hit that broke sales records with more than 20 million copies sold worldwide and is currently 14x platinum in the U.S.

Her musical career boasts tremendous awards and accolades, including seven Billboard Music Awards, the Billboard’s Millennium Award, which recognizes outstanding career achievements and influence in the music industry, as well as an American Music Award and the 2011 MTV Video Vanguard Award. To date, Spears has earned a total of six No. 1-debuting albums on the Billboard 200 chart and 34 Top 40 hit singles on the Billboard Hot 100 – four of which went to No. 1. Spears has been nominated for seven GRAMMY Awards and won for Best Dance Recording in 2005.

Britney’s music has not only touched the lives of millions, but she also has used her global platform and voice to support the LGBTQ community through a variety of initiatives. As a longtime ally of the community, she most recently received GLAAD’s 2018 Vanguard Award, presented to media professionals who have made a significant difference in promoting equality and acceptance of LGBTQ people.