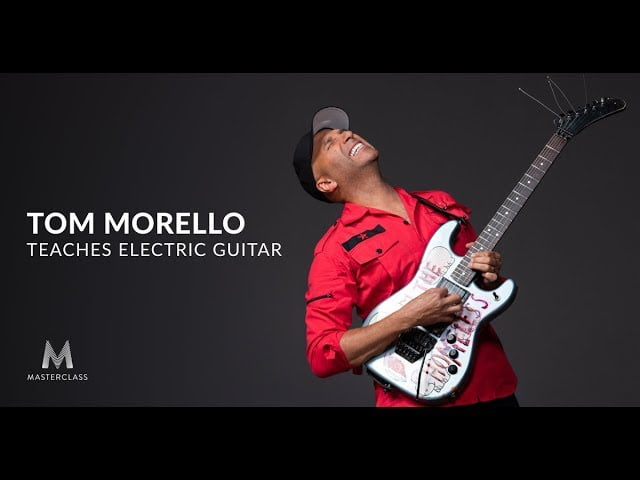 MasterClass, the online education company that enables anyone to learn from the best in the world, announced today that Grammy Award-winning musician and Rage Against the Machine cofounder Tom Morello will offer his first online class on electric guitar exclusively through its platform. In his MasterClass, Morello will teach students a wide range of guitar techniques including how to build a guitar riff, how to create a multi-layered song from scratch, and how to uncover and unleash one’s creative voice. Morello’s class is now available here. Enrollment for the class is $90 for lifetime access, or $180 per year for the All-Access Pass, which grants unlimited access to all new and existing classes.

Morello, a two-time Grammy winner and one of Rolling Stone’s “Greatest Guitarists of All Time,” is best known for his career as the lead guitarist of Rage Against The Machine, Audioslave, and Prophets of Rage. He has also performed with Bruce Springsteen and the E Street Band on several tours and albums. Morello’s distinctive unorthodox sound shatters traditional conceptions of the instrument’s capabilities as it blends heavy aggressive riffs with hip-hop sensibilities, while incorporating feedback noise, unconventional picking and tapping, and heavy use of guitar effects. Morello recently released his debut solo album The Atlas Underground which features collaborations with Marcus Mumford, Big Boi, Portugal. The Man, Gary Clark Jr., the Wu-Tang Clan’s RZA and GZA, Steve Aoki, Vic Mensa, and Bassnectar, among others.

“With guitar playing, there is a combination of rhythm, feedback, melody, ferocity, improvisation, otherworldly sounds and rock POWER that when done right, you feel in it the reptilian DNA of humanity,” said Tom Morello. “I wanted to teach a guitar class that will make your playing meaningful to you. In my MasterClass, I will provide the building blocks for every student to create an authentic, artistic self on the electric guitar.”

In his MasterClass, Morello will share his approach to making music that challenges the status quo, and teach students to create their own musical style. Catering to guitar players with a range of proficiencies — from self taught students who play guitar as a hobby to aspiring professionals who are fans of Morello’s electric guitar sound — Morello will demonstrate his signature techniques and discuss musical philosophy as he guides students through the process of writing, recording, and performing songs. Students will learn how to write a song with just two notes and how to advance their playing to a level of conceptual and technical thinking. Morello’s class will inspire students to find their own voices, develop the technical skill required to express those voices, speak fervently through their art, and challenge themselves to be better than they ever imagined.