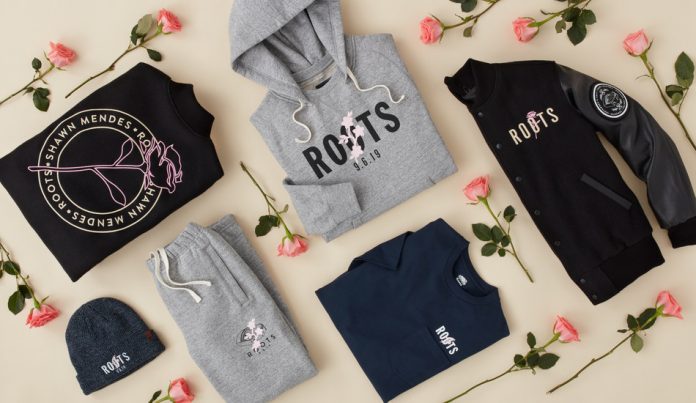 Roots, the premium outdoor lifestyle brand, announces the launch of Roots x Shawn Mendes, with a capsule collection designed in collaboration with Toronto-born multi-platinum singer/songwriter, Shawn Mendes. The official release of the limited-edition collection, which celebrates Shawn’s first-ever stadium show, is Tuesday, December 4, 2018 at 3:00 p.m. eastern time at the Roots x Shawn Mendes pop-up shop in the Roots store at the CF Toronto Eaton Centre. Shawn’s global fanbase will be able to buy the collection online at www.roots.com on December 5, 2018. Fans that attend the in-store event will be given a code for priority presale access and guaranteed tickets to Shawn’s Rogers Centre show. Roots x Shawn Mendes is the first step in an ongoing creative collaboration between Roots and Shawn.

Roots, together with Shawn and his creative team, designed the capsule collection to celebrate the announcement of Shawn’s homecoming with his first-ever headlining stadium show, taking place at the Rogers Centre on September 6, 2019. Presales for Shawn’s Rogers Centre show start on December 5 and go on sale to the general public on December 15 (a full list of on-sale timings and ticket links can be found at ShawnStadium.com). Shawn Mendes: The Tour begins in March 2019, with more than 60 dates across Europe, North America and Australia. In May 2018, Shawn released his highly-anticipated third album (Shawn Mendes) which debuted at #1 on international album charts, making him the third youngest solo artist to ever have three #1 albums.

For 45 years, Roots has been drawing inspiration through art and music and celebrating the individuality of style as a form of self-expression. Roots has proudly collaborated with Grammy- and Juno-winning musicians, Academy Award-winning actors, Olympic athletes and other notable celebrities across the globe. The Roots x Shawn Mendes collection welcomes another great artist into the creative fold.

Featuring nods to the album art for Shawn’s latest release, the limited-edition capsule collection consists of a hoodie ($88), sweatpants ($82), two pocket t-shirts ($36 each), a toque ($32), as well as a custom-designed Award Jacket ($598), handcrafted in the Roots Toronto Leather Factory. The collection embodies the unmistakable style, and uncompromising comfort and quality Roots is known for.

Toronto born multi-platinum singer/songwriter Shawn Mendes released his highly anticipated self-titled third album in May 2018. The album debuted at #1 on the Billboard 200 album chart as well as multiple additional worldwide markets, including Australia, Canada, Mexico, Belgium, Holland & more. Shawn Mendes made Shawn the third youngest solo artist to ever have three #1 albums, and became one of the top best-selling album debuts of 2018. The album shot to #1 on iTunes upon release in over 80 countries around the world. Leading up to the album, he released multiple tracks including “Youth” Featuring Khalid, “In My Blood” and “Lost In Japan.” Both “In My Blood” and “Lost In Japan,” the first two songs released off the new album, experienced massive success, soaring to the #1 and #2 spots on the overall iTunes chart in the U.S, Top 5 on iTunes in 50 countries, and held the #1 and #2 spots on Spotify’s “New Music Friday” playlist. With “In My Blood,” Shawn became the first artist to ever have had four #1 singles at AC radio before the age of 20. In April 2017, Shawn released his 3x Platinum hit “There’s Nothing Holdin’ Me Back.” The track scored Shawn his second #1 single at Top 40 radio and on Billboard’s Pop Songs chart, joining 7x Platinum single “Stitches.” Throughout his career, Shawn has achieved 3 consecutive #1 album debuts, 2 Platinum albums, and 8 consecutive platinum and multi-platinum singles. Worldwide, he has sold over 15 million albums, 100 million singles, and has amassed over 16 billion song streams and 5 billion YouTube views. Shawn has completed two sold-out world tours with over one million tickets sold, selling out legendary arenas including NYC’s Madison Square Garden, Toronto’s Air Canada Centre, and London’s O2 Arena in minutes. Shawn Mendes: The Tour begins in March 2019, with over 60 dates currently announced across Europe, North America and Australia, with more to be announced soon. He topped Billboard’s “21 Under 21” in 2017 and 2018 and has been featured on Forbes “30 Under 30,” Spotify’s “25 Under 25,” and Time Magazine’s “Time 100 Most Influential”. In February 2018, ROI Influencer Media recognized Shawn as the #1 Most Influential Artist and #1 Most Influential Teen across all social media platforms.