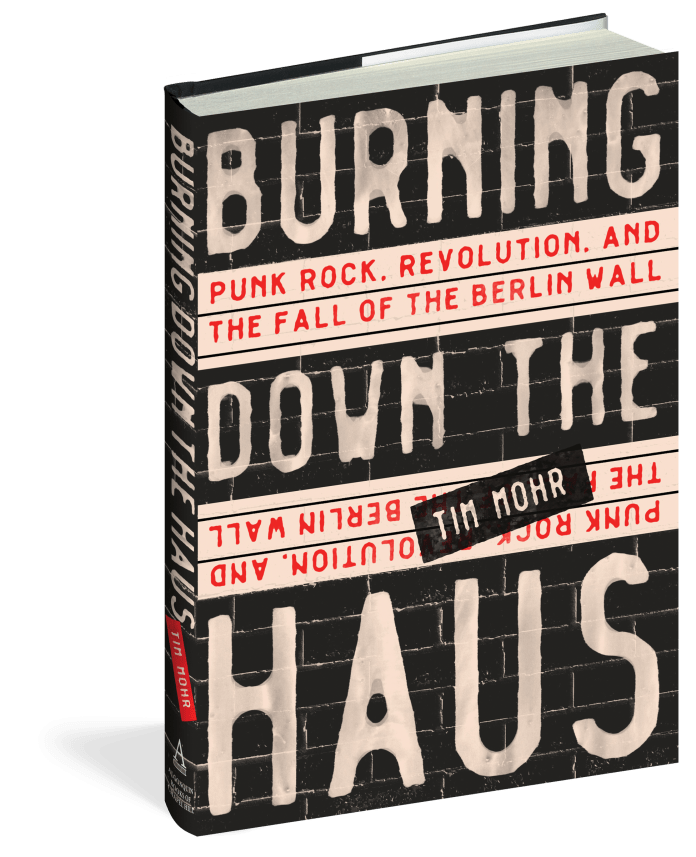 Long before the Berlin Wall came down, social discontent and a shared fear of nuclear annihilation among the young on both sides had already galvanized a generation of resisters. The end of a divided Germany actually came from within, fueled in part by punk rock. Throughout the 1980s, punk, with its clashing music and in-your-face fashion, became a secret but powerful tonic—the rallying point of an East German youth revolution and the soundtrack to a history-changing uprising.

In BURNING DOWN THE HAUS: Punk Rock, Revolution, and the Fall of the Berlin Wall renowned music journalist and award-winning German-language translator Tim Mohr brilliantly captures this historic moment.

Telling the little-known story of a group of East German kids who rebelled and helped set the world on fire, Mohr takes readers on a fascinating trip through the 1980s. Rejecting the dismal, pre-ordained futures that the state tried to impose on them, these teenagers embraced punk—the aesthetic, the music, the liberating feeling of collective anarchy—and defied the dictatorship. Banding together, they faced down surveillance, repression, beatings, and even imprisonment as they fought to create and control their own, individual futures.

Mohr, who arrived in Berlin in 1992 and discovered a netherworld of dark and dirty clubs in derelict buildings, learned the secret history of punk rock under the dictatorship from those who had lived it, and he fell in love with the world they had created.

Writing with the keen eye for observation and the narrative grace of a novelist, he resurrects this all-but-forgotten story with insight and cinematic urgency. Timely and resonant, Mohr’s incredibly accomplished first book, BURNING DOWN THE HAUS, is a testament to the essential power of youthful protest in the face of authority.

Tim Mohr is an award-winning literary translator of authors such as Alina Bronsky, Wolfgang Herrndorf, and Charlotte Roche. He has also collaborated on memoirs by musicians Gil Scott-Heron, Duff McKagan of Guns N’ Roses, and Paul Stanley of KISS. His own writing has appeared in the New York Times Book Review, New York Magazine, and Inked, among other publications. He also spent several years as a staff editor at Playboy magazine, where he edited Hunter S. Thompson, John Dean, and Harvey Pekar, and many others. Prior to starting his writing career he earned his living as a club DJ in Berlin.