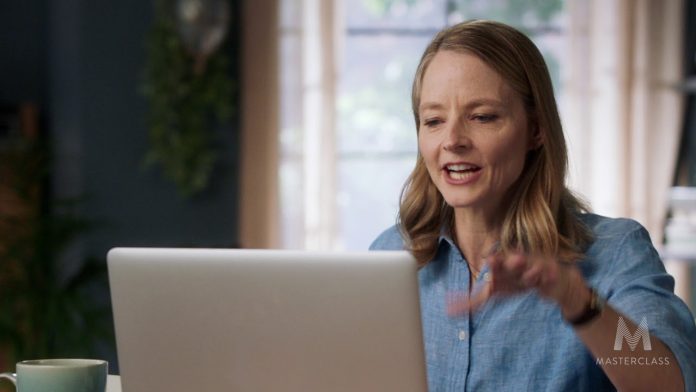 MasterClass, the online education company that enables anyone to learn from the best in the world, announced today that renowned actor-director Jodie Foster will offer her first online class available exclusively through its platform. Foster’s organic mastery of film direction, bolstered by decades of critically acclaimed on-screen performances, will provide students in her class with a unique and personal approach to filmmaking that will appeal to aspiring directors, screenwriters, actors, and cinephiles alike. Foster’s class is now available at www.masterclass.com/jfo. Enrollment for the class is $90 for lifetime access, or $180 per year for the All-Access Pass, which grants unlimited access to all new and existing classes.

Over her 52 year career, Foster has appeared in over 40 major films, directed four feature-length movies and won nearly 60 awards—among them, two Academy Awards, two BAFTA Awards, four Juniper Awards and three Golden Globes, including the Cecil B. DeMille Award for lifetime achievement. Foster started her career at the tender age of two and ascended to superstardom with striking performances in Taxi Driver, The Silence of The Lambs, The Accused, and Nell, portraying complex characters alongside acting heavyweights Robert De Niro, Anthony Hopkins, and Liam Neeson. Foster made her directorial debut in 1991 with Little Man Tate, following up with Home for the Holidays (1995), The Beaver (2011) and, her most recent feature film, Money Monster (2016), starring George Clooney and Julia Roberts. Since then, Foster has ventured into television, directing episodes of Netflix original series “House of Cards,” “Black Mirror,” and “Orange Is the New Black,” which earned her an Emmy nomination.

“I’m thrilled to be able to share the lessons I’ve learned over the years with people who are equally as passionate about film,” said Foster. “Authentic storytelling is about having the courage to be vulnerable, tapping into those deeply personal experiences and identifying the right ingredients to have them translate on screen. I wanted to teach this MasterClass to share that experience of creating a signature and expressing yourself in a work of art. For me, that’s the joy of making movies.”

In her MasterClass, Foster provides aspiring filmmakers with a practical and holistic approach to cinematic storytelling, sharing case studies from some of her iconic films, including Money Monster and The Beaver, and guiding students across all steps of the creative process from ideation and storyboarding to how to approach an edit. The class also features a section on collaboration and shows Foster working with prominent screenwriter Scott Frank (Logan, Out of Sight, Minority Report) to develop a screenplay. Students will walk away with a practical applications for directing, understanding how to bring out the best in actors, make distinct visual choices and elevating the “big idea” in their film, and will have exclusive access to scripts and directing notes from the four films Foster directed as part of the accompanying workbook.