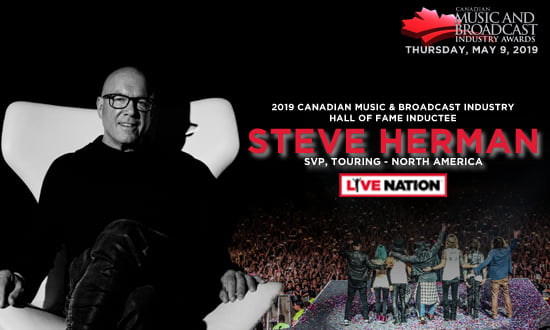 Canadian Music Week  is pleased to announce Steve Herman, SVP, Touring at Live Nation, as the 2019 inductee to the  Canadian Music & Broadcast Industry Hall of Fame . Steve will be honoured for his achievements and longstanding career in the music industry at the annual Canadian Music and Broadcast Industry Awards Gala Dinner at Rebel Entertainment Complex in Toronto on Thursday May 9th, 2019.
Steve has been involved in the music industry for decades and throughout his many roles, he has impacted, developed, and guided the careers of many artists and industry leaders.
Steve joined Live Nation in 2009 as President of Artist Service and soon after joined the company’s Touring team as Senior Vice President, where he is now one of company’s leading tour promoters. Steve has promoted some of the world’s top artists, including: Prince, Dixie Chicks, Backstreet Boys, Black Sabbath, Tom Petty and The Heartbreakers, Bryan Adams, Yusuf (formerly known as Cat Stevens), David Blaine, Nickelback, OneRepublic, and The Smashing Pumpkins to name a few.
Most recently, Steve worked with the team that successfully reunited Guns N’ Roses where he promoted the “Not in This Life Time Tour.” This tour has recently surpassed $600 million in gross box office sales – making it one of the highest grossing tours in history.
Read more about Steve’s career here .