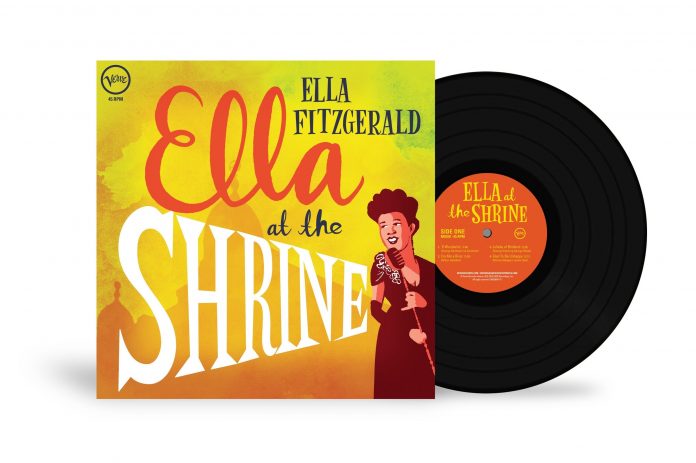 Recorded live at the Shrine Auditorium in Los Angeles on January 21, 1956, Ella At The Shrine captures Ella Fitzgerald at the beginning of her career renaissance, just weeks after becoming the first signing to Norman Granz’s newly-created Verve Records. The brief but thrilling set, which was part of Granz’s historic Jazz At The Philharmonic concert series, was only recently discovered after more than 60 years of languishing in Verve’s vaults. Thought to be Verve’s first live recording, Ella At The Shrine is available today via Verve/UMe as a single LP on standard weight black vinyl. It will be available for digital download and streaming for the first time next Friday, March 1. This wide release follows a limited edition yellow vinyl version released in November 2018 as part of Record Store Day’s Black Friday. Order Ella At The Shrine now: https://UMe.lnk.to/EllaAtTheShrinePR

Ella At the Shrine contains the sweet taste of a new and shining era for Ella as she becomes the crown jewel of Verve Records. Fitzgerald delivers a rousing seven-song set, which most notably includes an early version of George and Ira Gershwin’s “‘S Wonderful,” three years before she would perfect the song on her monumental 1959 album Ella Fitzgerald Sings The George and Ira Gershwin Song Book and cause Ira Gershwin to famously remark: “I never knew how good our songs were until I heard Ella Fitzgerald sing them.” Ella At the Shrine showcases The First Lady of Song just weeks before she’d go on to record her breakthrough album Ella Fitzgerald Sings the Cole Porter Song Book. Other tunes performed this evening include the bluesy “Cry Me A River,” the rhythmic “Lullaby of Birdland,” the swinging “Joe Williams’s Blues” and “Air Mail Special,” a bouncy number featuring Fitzgerald’s famed scatting skills. The album includes liner notes by jazz broadcaster and educator, Phil Schaap, who discovered this recording in an undocumented area in Verve’s vault where it sat untouched for more than six decades.

In celebration of Fitzgerald’s centennial in 2017, Verve debuted the previously unreleased Ella at Zardi’s: an acclaimed live album that was recorded during her two-week stint at the nightclub in Hollywood. This recording, which earned Fitzgerald her first No. 1 on the Jazz Album Chart and her second No. 1 on the Traditional Jazz Albums Chart, was initially thought to be both the label’s and Fitzgerald’s first live album for Verve. Remarkably, Granz recorded and emceed Ella at the Shrine 10 days prior, announcing on the LP, as Fitzgerald is leaving the stage and the crowd roars for more, that “Ella has to get back to Zardi’s.” Due to the closeness in timeframe, it is easy to assume she is backed by the same musicians who played on Ella at Zardi’s: Don Abney, piano; Vernon Alley or Joe Mondragon, bass; Frank Capp Drums.

ELLA AT THE SHRINE TRACK LISTING

SIDE ONE1. ‘S Wonderful2. Cry Me a River3. Lullaby of Birdland4.Glad to be Unhappy