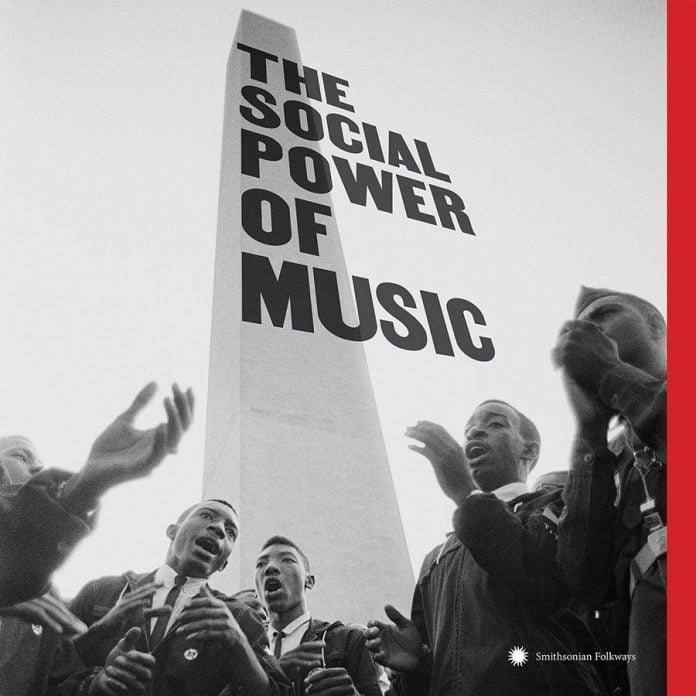 On February 22,  2019 Smithsonian Folkways Recordings will release The Social Power of Music, a new box set that examines the roles of music in our lives from many angles and through many voices.  Over four CDs, 80+ tracks and an illustrated 124-page booklet, The Social Power of Music presents some of the most powerful moments in Smithsonian Folkways’ vast and ever-expanding catalog, putting them in conversation with each other to highlight the ways song has shaped the societies we live in

The Social Power of Music looks at this music through four different perspectives.  Disc 1: Songs of Struggle channels the visceral power of the fight for civil rights, featuring household names from Folkways’ archives including Woody Guthrie, The Freedom Singers and Pete Seeger, and songs that defined a generation.  Disc 2: Sacred Sounds presents music from many religions and spiritual practices, in some cases drawing from rarely heard or known ceremonies.  Disc 3: Social Songs and Gatherings shows how we use music to come together, often in celebration.  Disc 4: Global Movements looks to the use of roots music in key political movements around the world, tapping into anti-fascist verses, odes to the working class, and polemics against governmental corruption and violence.

The box set, and the idea of music’s centrality to the way people connect to one another, inspired the upcoming Smithsonian Year of Music, which presents music and sound events in Washington, DC and around the country every day throughout 2019.  The series will kick off with a listening party for the compilation on January 2, 2019 at Songbyrd Record Café and Music House in Washington DC.  “The Social Power of Music” will also be the animating theme of the 2019 Smithsonian Folklife Festival, which takes place annually on the National Mall.

Listen to a sampler from the box set here:

The massive scope and virtuosic assembling of this box set may reflect the original vision of Smithsonian Folkways to record and document the entire world.  Songs that rang true in the 1960’s, railing against the plight of women, minorities and human rights, are just as poignant over fifty years later, as the world has begun to roll back much of what was gained by the global civil rights movements. There’s a visceral power, a frisson, in hearing how the lyrics in The Social Power of Music reverberate across generations and cultures.  The hope for the artists making this music at the time, for us listening now, and for those writing new songs inspired by this music, is the same as it ever was: to show us the paths to make a better world.

Brought together on these four discs is music from labels that Smithsonian Folkways has acquired over the years, including Arhoolie, which documented the music of social gatherings throughout the US, and Paredon, which released activist music from around the world, as well UNESCO and Monitor, which documented folk traditions across the entire globe.   Civil rights legend Fannie Lou Hamer, a woman who shook the halls of power, leading a congregation in song with her mind “set on freedom.”  Lebanese musician Marcel Khalife’s quavering voice singing the Palestinian poem “The Passport” about being required to carry a passport in your native land.  Country Joe McDonald’s acerbic Vietnam anti-war song “I Feel Like I’m Fixin’ To Die”.  Hymns of the Old Regular Baptists of Kentucky, the rhythmic call-and-response from African-American railroad worker songs, the blend of high-pitched charango and vocals from Latin American protest singer Suni Paz.

The Social Power of Music is set to remind us of the universality of these moments, showing that through music we are united.