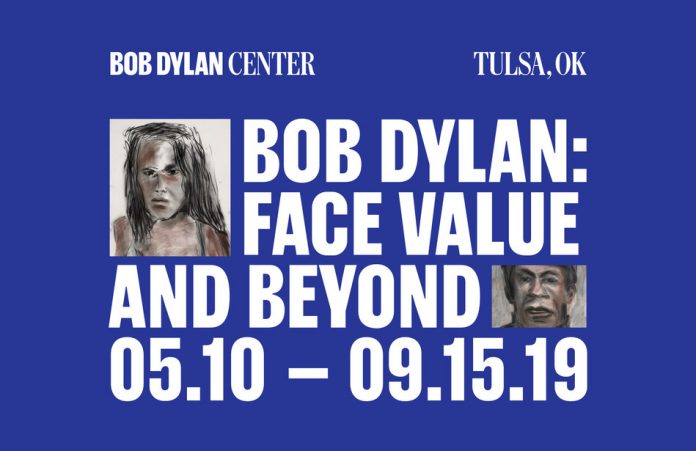 The Bob Dylan Center will present a new exhibition, Bob Dylan: Face Value and Beyond, beginning May 10 at the city’s acclaimed Gilcrease Museum. Curated by The Bob Dylan Archive, the exhibition will include the first regional showing of Dylan’s renowned Face Value portrait series, as well as drawings, filmed performances, writings, personal effects and ephemera exclusive to The Archive.

Face Value and Beyond offers an array of fresh avenues to explore the many facets of Bob Dylan’s artistry, enabling audiences to view them as “products of the same extraordinary, inventive imagination,” as art historian John Elderfield recently wrote. Part gallery exhibition, part exploration of the texture and nature of The Archive itself, the works on display will show how the public and private nature of Dylan’s art are often closely linked and part of the same furtive, exploratory mind.

One of the most important cultural figures of our time, Bob Dylan has been creating visual art since the 1960s, but only began exhibiting his work publicly in 2007. The 12 pastel portraits in Face Value represent Bob Dylan’s first public foray into portraiture, having debuted at London’s National Portrait Gallery in 2013 and shown in the U.S. only briefly in 2015. The exhibition will also premiere drawings and sketches from The Bob Dylan Archive, including two recently unearthed Dylan sketchbooks from 1970 and a series of never-before-seen artworks originally created by Dylan for his 1973 book Writings and Drawings, only a fraction of which appeared in that volume or have ever been reproduced in any form.

Bob Dylan: Face Value and Beyond will also feature archival manuscripts and objects exclusive to The Bob Dylan Archive, including hand-written lyrics to some of the artist’s best-known songs that reveal a glimpse into Dylan’s creative process through the artist’s many visible edits. The exhibition will include numerous elements spanning five decades, including two silent Andy Warhol-directed “Screen Tests,” of Dylan, the leather jacket worn by the artist at the Newport Folk Festival in 1965 when he famously unveiled his new electric sound, and a wallet and address book from the mid-1960s that contain a number of personal references and effects.

Bob Dylan: Face Value and Beyond runs through Sept. 15. Museum hours are 10 a.m. to 5 p.m., Tuesday through Sunday. For more information, visit gilcrease.org.