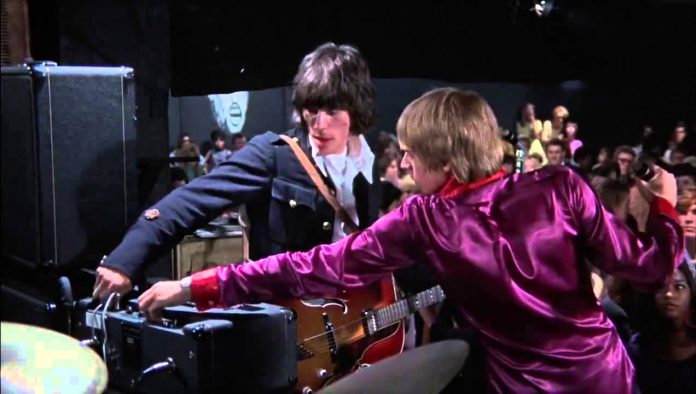 The most widely noted cameo in Michelangelo Antonioni’s Blow-Up’ movie was by The Yardbirds, who perform “Stroll On” in the last third. Antonioni first asked Eric Burdon to play that scene but he turned it down. As Keith Relf sings, Jimmy Page and Jeff Beck play to either side, along with Chris Dreja. After his guitar amplifier fails, Beck bashes his guitar to bits, as The Who did at the time. Antonioni had wanted The Who in Blowup as he was fascinated by Pete Townshend’s guitar-smashing routine. Steve Howe of The In Crowd recalled, “We went on the set and started preparing for that guitar-smashing scene in the club. They even went as far as making up a bunch of Gibson 175 replicas … and then we got dropped for The Yardbirds, who were a bigger name. That’s why you see Jeff Beck smashing my guitar rather than his!” Antonioni also considered using The Velvet Underground (signed at the time to a division of MGM Records) in the nightclub scene, but, according to guitarist Sterling Morrison, “the expense of bringing the whole entourage to England proved too much for him”.

Michael Palin of Monty Python can be seen briefly in the sullen nightclub crowd and Janet Street-Porter dances in stripy Carnaby Street trousers.