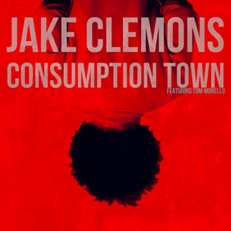 Singer, songwriter and multi-instrumentalist Jake Clemons will release his new single “Consumption Town” on May 17th, the second offering from his upcoming album, Eyes On The Horizon, set for release this summer. Joined by guitar legend Tom Morello and mixed by award winning Mixer and Producer Eddie Kramer, Clemons once again addresses his thoughts and shares his beliefs in one of the upcoming albums strongest and most intricate of songs.

The song “Consumption Town” is meant as a wake-up call. “It’s about how we seem to be distracted by desire and greed, and how big corporations are creating these distractions and causing us to lose sight of our needs. It’s also a change in direction for me musically. I was really delighted to have Tom Morello featured on guitar for ‘Consumption Town” says Jake.

Dividing his time between touring the world, performing his own music and spending the last seven years as the tenor and baritone saxophonist with Bruce Springsteen’s E Street Band (stepping in for his Uncle, the late Clarence Clemons,) Jake continues to make a deep connection in the present by living life to its’ fullest. He will be touring in the Netherlands and Italy this June and will be recording with the renowned producer Eddie Kramer as part of the ‘Mix With The Masters’ Series at La Fabrique Recording Studios in the South of France on June 1-4. Clemons will return to the UK and Ireland in October for additional tour dates.