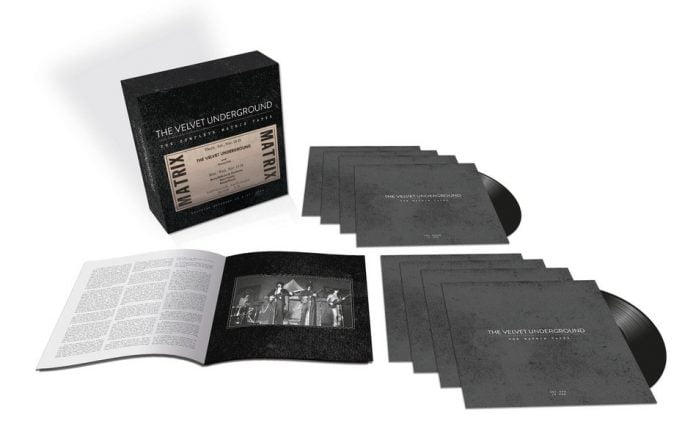 The Velvet Underground toured extensively in 1969, but set up shop in San Francisco in November and early December for a series of 18 nights over four separate engagements, the first at the Family Dog, the rest at the fabled North Beach club the Matrix, opened in a one-time pizza parlor by Jefferson Airplane’s Marty Balin in 1965. Over the course of their residency, which began November 11th, the club’s four-track recorder, manned by owner Peter Abram from a booth at the side of the stage, was rolling through much of it captures the highlights of two nights – November 26, the day Richard Nixon authorized a bill to create a draft lottery, and November 27, Thanksgiving – as detailed in Rolling Stone editor David Fricke’s liner notes in the box set booklet.

Originally release as a CD box set, The Velvet Underground – The Complete Matrix Tapes makes its vinyl debut as a limited edition, eight-LP, 43-track box set and will be available worldwide on July 12 and exclusively available in the U.S. through shop.velvetundergroundmusic.com.

These shows, taped several months after the release of the third, self-titled Velvet Underground album earlier that year, and before heading to the studio to record Loaded the following spring, featured the post-John Cale incarnation of the band, with newest member Doug Yule on bass and keyboards joining Lou Reed and remaining members guitarist Sterling Morrison and percussionist Maureen Tucker. Some versions of these performances, taken from soundboard mixes, were first issued in 1974 by Mercury Records as part of a double LP,  1969 The Velvet Underground Live , while other audience recorded versions released were taken from cassette tapes made by the late Bob Quine, a huge fan and, at the time, a St. Louis law student who later went on to play guitar for both Richard Hell and Reed. Quine was at a number of the shows during their stint at the club, and his cache eventually was released in 2001 as The Quine Tapes.

The Velvet Underground – The Complete Matrix Tapes features 43 recordings that have been mixed down directly from the original in-house multi-tracks, including the 18 tracks featured on a Super Deluxe Edition of the Velvets’ third album and nine previously unreleased performances marking the first time all the available tapes will be released commercially. As can be heard, the shows were intimate, and features early versions of yet-to-be-recorded songs like “Sweet Jane,” “New Age” and “Rock & Roll.”  Set One includes previously unreleased versions of “Some Kinda Love” and “Sweet Jane,” while Set Two’s rarities include performances of “There She Goes Again,” “After Hours” and “We’re Gonna Have a Real Good Time Together.”  Set Three’s highlight is the almost 40-minute-long “Sister Ray,” previously heard on the Super Deluxe Edition of Velvet Underground. Rare live takes of “Venus in Furs” (one on Set One, the other Set Two) and Set One’s “The Black Angel’s Death Song” (according to Fricke’s liner notes, the first time Yule had ever played the song) are also notable for their inclusion here.

Concludes Fricke about The Velvet Underground – The Complete Matrix Tapes: “On one hand, [it] is just two nights, in one room, in the life of a working band. It also has everything they aspired to and achieved on stage, every night, everywhere: the magnificent aggression and determined joy; the fictions shot through with truth; the lasting bonds established in almost total, commercial blackout. You can easily walk into the music and never want to leave – a perfect definition of both a great rock & roll gig and a history that keeps on giving.”