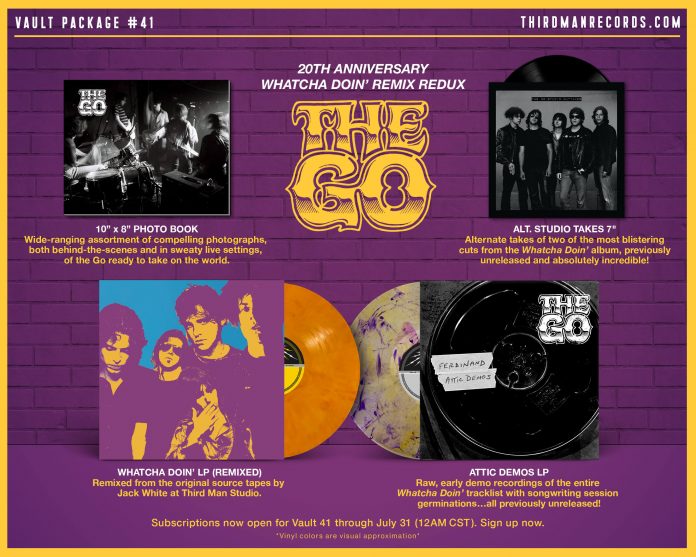 Third Man Records is excited to announce Vault Package #41, The Go Whatcha Doin’ 20th Anniversary Remix Redux. The package is centered around a “Summer Sun” colored pressing of The Go’s 1999 LP Whatcha Doin’ (20th Anniversary Remix Edition), originally released on Sub Pop, which features Jack White on lead guitar and was remixed by White himself from the original reel-to-reel tapes at Third Man Studio. Also included in the package are pressings of the Ferdinand Attic Demos LP and the Alternate Studio Takes 7″ — both of which are comprised of entirely unreleased material — as well as a 10″ x 8″ photo book titled “The Go In Black And White.” Sign up is open now through July 31 at 12am CST.

Detroit in the heady days of 1999 was a town overflowing with electrifying and energetic bands. If one outfit seemed poised above the others to “make it”, the odds-on bet was the Go. Freshly signed to the revered indie label Sub Pop with a clutch of killer songs itching to be laid to tape, their live show was truly thrilling and all the constellations seemed perfectly aligned for their ascendence. Led by band mainstays Bobby Harlow (lead vocals), John Krautner (rhythm guitar) and Marc Fellis (drums) and rounded out by dear friends Dave Buick (bass) and Jack White (lead guitar) they tracked their debut LP Whatcha Doin’ early in the year and by the time it was released in September, multiple line-up changes piled up and momentum seemed to have dissipated. If ever there was a cult record from the genre, the city, the era…Whatcha Doin’ is it. Produced and mixed by Matthew Smith (best known for his work in Detroit psychedelic pop stalwarts Outrageous Cherry), the sounds captured in the studio were an impressionist distillation of the band’s songwriting prowess. While responsible for helping garner the band’s badass rock and roll reputation, there was sentiment amongst some that the stylistic mixing decisions on the as-released LP eschewed the band’s in-person ferocity and ultimately kept the album from catching on to a wider audience.

For years, there were disagreements, concessions, shelved albums, joint tours, buried hatchets, and confusion as to who in the hell even possessed the original master tapes. But now Third Man Records, in conjunction with Sub Pop, is proud to present the 20th anniversary remix of Whatcha Doin’.