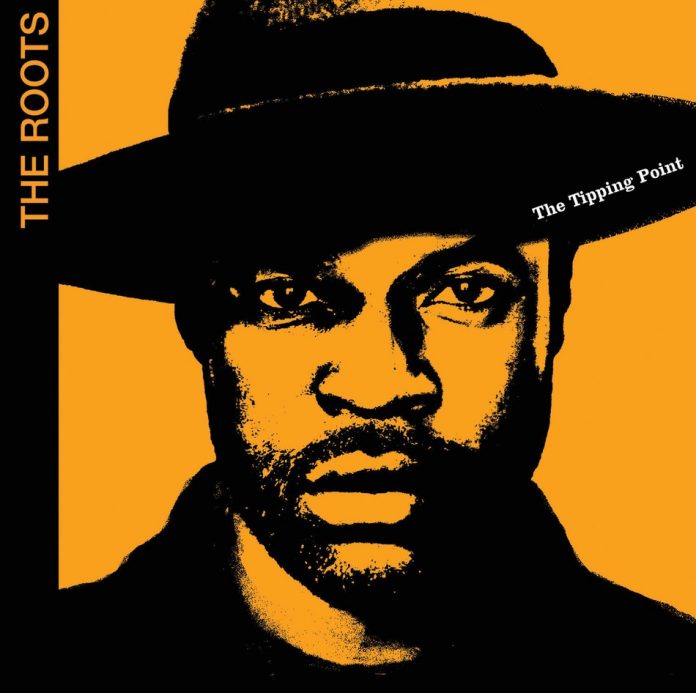 In honor of its 15th anniversary, The Roots’ legendary sixth album The Tipping Point is available once again via Geffen/Urban Legends. The amalgam of hip-hop, soul and funk, originally released on Geffen Records in 2004, has been reissued as standard black double vinyl as well as on translucent gold limited-edition colored double vinyl, to be released July 12.

The Tipping Point, named after Malcolm Gladwell’s 2000 pop-sociology classic in which he explored how minor movements and behaviors can proliferate, was where the Roots really honed their sound and messaging. The Philadelphia rap crew, led by MC Tariq “Black Thought” Trotter and drummer Ahmir “Questlove” Thompson, was at a crossroads, with acclaimed albums like 1996’s Illadelph Halflife and 1999’s Things Fall Apart under their belt, while still five years away from their national TV turn on Late Night with Jimmy Fallon.

On highlights like “Star,” “Don’t Say Nuthin'” and “Guns Are Drawn,” the Roots did what they do best: blending multifarious influences from soul, funk and jazz music, funneled through a canny social conscience and kinetic musicians: bassists Adam Blackstone and Leonard “Hub” Hubbard, guitarists Anthony Tidd, “Captain” Kirk Douglas and Martin Luther, keyboardists Kamal and Omar Edwards and more, helmed by producers Questlove and Scott Starch. The album samples Sly & the Family Stone (“Everybody is a Star” on “Star”), Al Hirt (“Harlem Hendoo” on “Stay Cool” and the Rimshots (“Dance Girl” on “Web”).

At the time, the Roots were restless about their message, wanting to make music about crucial issues rather than hedonism. “People could have easily thought, ‘OK, these guys are about to be all on this yacht, pouring champagne on people,” Questlove said in a 2006 interview with Rolling Stone. “I’m kind of noticing that nobody in urban music really has the balls to just stop partying for one second.” The Tipping Point is full of declarations and calls to action, a cultural splash that would make Malcolm Gladwell proud. Black Thought puts it best on “Guns Are Drawn”: “We go to war and transcend space and time / When every record ain’t a record just to shake behinds.” The Tipping Point is just that: a battle cry.

The results debuted at No. 4 on Billboard’s Top 200 and gleaned positive reviews: at the time, Slant Magazine described The Tipping Point as “their most jovial effort yet,” and Entertainment Weekly called it “an eclectic and often breezy reimagining of hip-hop’s energetic essence.” Now’s your chance to revisit this legendary chapter in the Roots’ history on exclusive translucent gold limited-edition double vinyl. To honor this reissue of The Tipping Point, Urban Legends is proud to partner with key institutions in Philadelphia, including the Roots’ media company, OkayPlayer.

Side B
Somebody’s Gotta Do It
Duck Down!
Why (What’s Goin On?)
The Mic
Melting Pot
Din Da Da