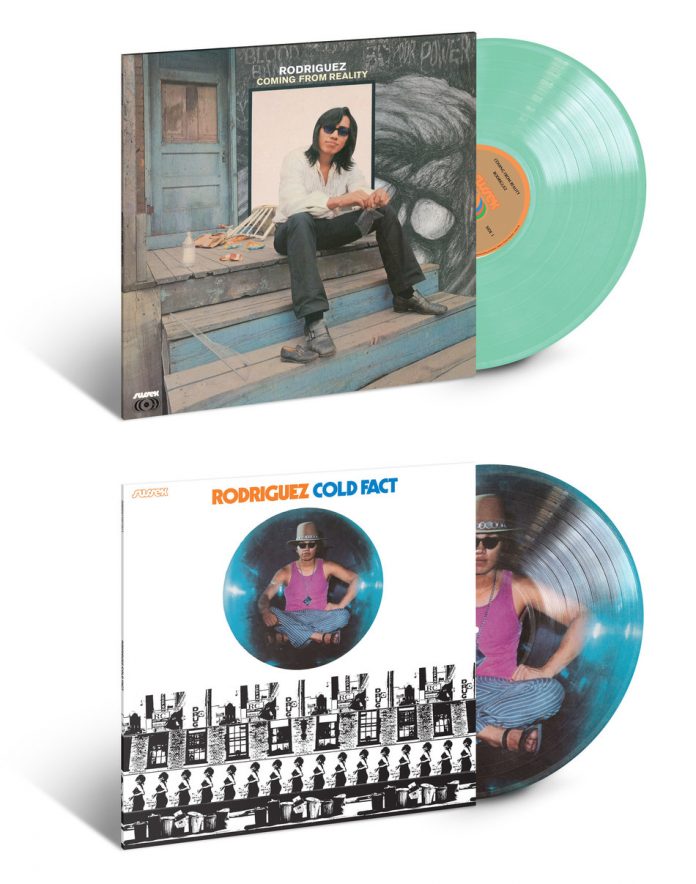 Rodriguez, the enigmatic subject of the 2012 Academy Award®-winning documentary, Searching for Sugar Man, released two albums with Sussex Records, 1970’s Cold Fact and 1971’s Coming from Reality. Out of print on vinyl for several years, both albums are newly remastered by Alex Abrash at AA Mastering and are available now for preorder ahead of their August 30 release by Sussex/UMe in CD, 180-gram black vinyl, and limited special vinyl editions. Both albums have also been released digitally for the first time.

In addition to both albums’ new CD and black vinyl editions, a new picture disc vinyl LP for Cold Fact replicates the “Rodriguez in a crystal ball” image from its cover, and Coming from Reality is showcased with a new bottle-clear color vinyl LP, referencing the bottle in the album’s cover photo.

The CD for Coming from Reality features three additional bonus tracks, originally recorded in 1972-’73 for a third album that was never completed. The tracks were co-produced by Dennis Coffey and Mike Theodore, who also co-produced Cold Fact. The tracks were first issued in 2009 on the Light in the Attic CD release, and they were also featured on the Searching for Sugar Man soundtrack.

Coming from Reality  [CD]1.  Climb Up On My Music2.  A Most Disgusting Song3.  I Think Of You4.  Heikki’s Suburbia Bus Tour5.  Silver Words?6.  Sandrevan Lullaby-Lifestyles7.  To Whom It May Concern8.  It Started Out So Nice9.  Halfway Up The Stairs10. CauseBONUS TRACKS11. Can’t Get Away12. Street Boy13. I’ll Slip Away

Coming from Reality  [180g vinyl LP; ltd. edition bottle-clear color vinyl LP]SIDE A1.  Climb Up On My Music2.  A Most Disgusting Song3.  I Think Of You4.  Heikki’s Suburbia Bus Tour5.  Silver Words?SIDE B1.  Sandrevan Lullaby-Lifestyles2.  To Whom It May Concern3.  It Started Out So Nice4.  Halfway Up The Stairs5.  Cause