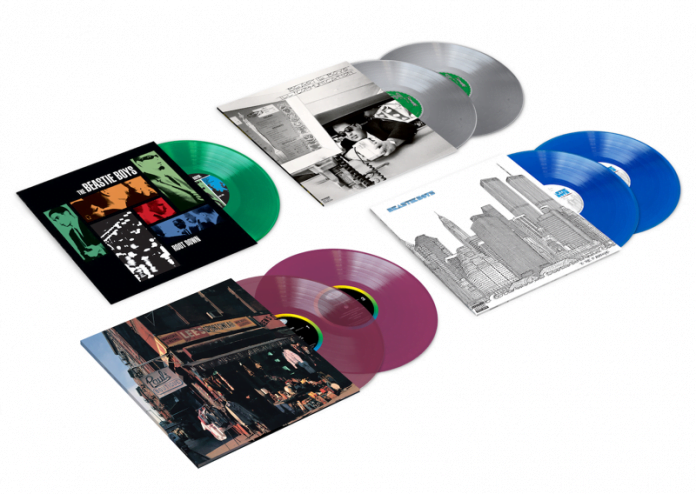 To mark the 30th anniversary of Beastie Boys’ 1989 landmark second album, Paul’s Boutique will be released as a 2LP set pressed on standard black vinyl as well as limited edition violet coloured vinyl.

Recorded in Los Angeles with a sample-based Dust Brothers production, Paul’s Boutique marked a giant creative leap forward for Adrock, Mike D and MCA. Ranking high on critic’s lists including Pitchfork’s “Top 100 Albums of the 1980s,” Time Magazine’s “100 Greatest Albums of All TIME” and Rolling Stone’s “500 Greatest Albums of All Time,” Paul’s Boutique went on to sell over 2 million albums.

Beastie Boys’ multi-platinum selling album Ill Communication will be released as a limited edition, 2LP set pressed on silver-metallic coloured vinyl. There will also be multiple limited edition vinyl pressings of Root Down EP, available as orange, red, blue and green, that will be randomly distributed and sold separately.

Released in 1994, Beastie Boys’ fourth studio album Ill Communication debuted at No. 1 and was an unstoppable force, pervading every aspect of pop culture.

Its charge to the top of the charts was led by “Sabotage” and its legendary Spike Jonze/Nathanial Hornblower ’70s TV police drama tribute, as Rolling Stone dubbed Ill Communication 1994’s “soundtrack for summer.” Crowds and critics alike were floored by highlights “Sure Shot,” “Root Down” and “Get It Together,” as Vibe—in the magazine’s first cover story on a white artist–hailed Beastie Boys as “perhaps the most consistently innovative musicians to emerge out of hip hop.” It was a claim that Ill Communication has justified for years to come, and 25 years later Ill Communication’s impact has resonated with generation after generation.

Shortly after, Beastie Boy’s released the Root Down EP featuring the original album version of “Root Down” off Ill Communication, plus several remix versions. Also included are seven live tracks from their 1995 European winter tour.

Beastie Boys’ self-produced dedication to their home state of New York, To The 5 Boroughs, celebrates its 15th anniversary with a 2LP, limited edition blue vinyl pressing.

Released in 2004, the platinum selling To The 5 Boroughs hit No. 1 on the Billboard 200, Top Rap Albums, Top R&B/Hip-Hop Albums, Top Current Albums, Rap Album Sales and Top Album Sales charts. The album features a steady mix of deep pop culture references in tracks such as “Shazam!” and “Ch-Check It Out,” as well as more serious social and political issues with “Right Right Now Now,” “It Takes Time To Build” and “An Open Letter To NYC.” Rolling Stone stated “To The 5 Boroughs is an exciting, astonishing balancing act: fast, funny and sobering,” while Pitchfork proclaimed, “the album’s easy air speaks to veteran, nothing-to-lose attitude of both the city and the group.”

B-Boy Bouillabaisse
D2a 59 Chystie Street
D2b Get On The Mic
D2c Stop That Train
D2d A Year And A Day
D2e Hello Brooklyn
D2f Dropping Names
D2g Lay It On Me
D2h Mike On The Mic
D2i A. W. O. L

To The 5 Boroughs (2LP)
A1 Ch-Check It Out
A2 Right Right Now Now
A3 3 The Hard Way
A4 It Takes Time To Build
B1 Rhyme The Rhyme Well
B2 Triple Trouble
B3 Hey Fuck You
B4 Oh Word?
C1 That’s It That’s All
C2 All Lifestyles
C3 Shazam!
C4 An Open Letter To NYC
D1 Crawlspace
D2 The Brouhaha
D3 We Got The