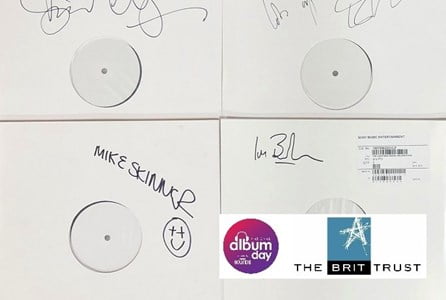 With this year’s National Album Day set for 12th October – one of the events being staged as part of a week-long build up that will celebrate our nation’s love of the album will be a ‘White Label’ Auction of around 300 white-label LP test pressings.

The auction – the first of its kind to be held – will take place the weekend prior on Saturday, 5th October at 11.00am. It will be hosted live onsite/online for UK and international collectors by the music memorabilia and vinyl records specialists Omega Auctions from their Newton-Le-Willows (Merseyside) base.

The explosion in sales of vinyl in recent years has created a wealth of ‘white label’ test pressings – produced to ensure the sound quality is as the artist intended and so called because there is no sleeve/label artwork at this stage. With as few as 5 or 10 of each being produced, these first-off-the-press copies are typically checked by artists and their representatives and are much sought after by fans and collectors.

The breadth of British music will be represented in the sale, including early 60s/70s recordings from David Bowie (Decca), The Who (My Generation), Eric Clapton (Slowhand), Dusty Springfield (Dusty in Memphis) and The Specials (The Specials – signed), to more contemporary offerings such as a signed copy of No.6 Collaborations Project by Ed Sheeran. There will be discs from the likes of Liam Gallagher (As You Were), Coldplay (The Butterfly Package – signed), Paul Weller (Stanley Road), Arctic Monkeys (Tranquility Base Hotel + Casino), Kylie Minogue (Step Back in Time), 2019 Mercury Prize shortlisted Foals (Everything Lost Will Not Be Saved Part 1) and Anna Calvi (Hunter). One of this year’s National Album Day ‘album champions’, Mark Ronson (Late Night Feelings), also features in the sale

The catalogue will be live online by 20th September here.