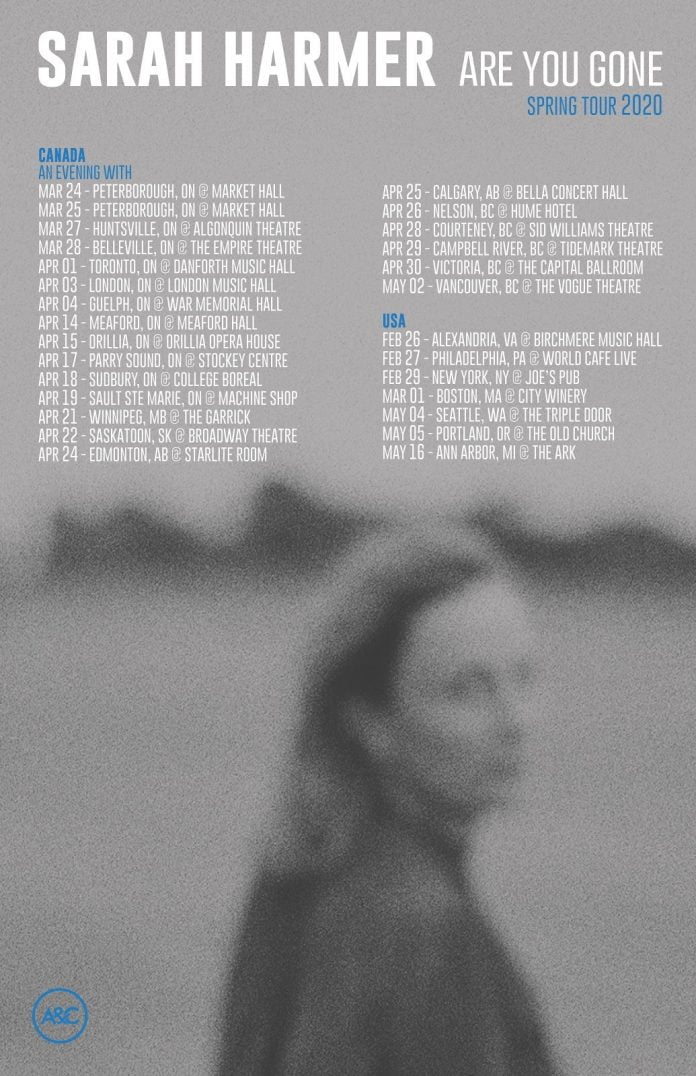 Multi-award-winning, platinum-selling singer-songwriter and environmental activist Sarah Harmer announces Spring Tour dates beginning March 24 with stops across Canada and the US. Each Canadian date will feature two full sets from Harmer. Full tour dates can be found below.

On February 21, 2020, Harmer will release Are You Gone, her first album in a decade, via Arts & Crafts. A deeply personal and political collection of songs motivated by the beauty of life, the urgency of the climate crisis, and the question of loss, Sarah called the album a spiritual successor of sorts to her acclaimed 2000 debut, You Were Here, which made many year-end critics’ lists, and which TIME called the year’s best debut album. Its simple title, Are You Gone, is a meditation on the idea of presence, and a bookend to the questions posed on You Were Here – a sharpened, more electric confrontation with the realities of nature and human nature.

The result of an unshakeable inclination to make music in conflict with a lifestyle more attuned to privacy, quiet, and activism, Sarah wrote Are You Gone gradually over the last decade as she traded music for grassroots organizing as her “day job.” Between co-founding the citizen’s organization PERL (Protecting Escarpment Rural Land) and leading the coalition’s successful efforts to prevent a quarry from being built on the Niagara Escarpment, she became a fixture in local politics and advocacy, while keeping her musical chops fresh by writing and playing casually with friends. Finally, in 2019, while pondering the “ghosts” of loss, capitalism’s gluttony and music’s potential as a public platform, Sarah got to work on Are You Gone, her most sophisticated record to date.

Encompassing a stylistic range from barebones folk to layered indie rock, album opener “St. Peter’s Bay” blends melancholic vocals and smooth atmospherics to effectively conjure the feeling of standing at dusk overlooking an endless sea, while “Take Me Out” is a modern, punchy alt-rock take on the near impossibility of letting go. “What I Was to You” is a tribute to Harmer’s lifelong friend Gord Downie of the Tragically Hip, and psychedelic-tinged piano ballad “The Lookout” tackles the angst of love-across-timezones. Penultimate track “Shoemaker”, about Sarah discovering an old book and census of her great great Glaswegian grandfather, calls to mind the gently ominous, slowly shifting chords of Sparklehorse before transforming into a gorgeous, almost-crescendoing show of Sarah’s vocal range. “See Her Wave” wraps the album with an acoustic goodbye written in memoriam to another friend who moved on.

Sarah has performed on The Late Show with David Letterman, Ellen, has been nominated for the Polaris Music Prize, garnered nine JUNO Award nominations and two wins, and been widely praised for her “razor-sharp songwriting chops” (NPR Music) and “plainly hooky” melodic sensibility (Rolling Stone).

Arts & Crafts has also announced that it is reissuing Sarah Harmer’s entire vinyl discography, including first-time vinyl editions of Songs For Clem, You Were Here, All of Our Names, and I’m A Mountain, and the first reprint of Oh Little Fire. All titles including Are You Gone are available for pre-order now.