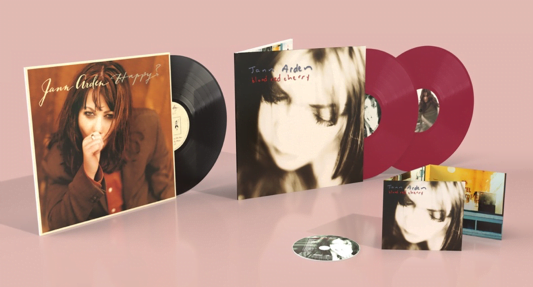 Canadian multi-platinum and award-winning singer, songwriter, broadcaster, and author Jann Arden announces the 20th anniversary deluxe edition of her critically-acclaimed album, Blood Red Cherry for January 24. The special anniversary edition features new liner notes recently written by Jann, as well as two previously unreleased songs (“Love Me Love” and “Everything”) and three demo tracks not included on the original. It will be a 2 disc edition pressed on 180 gram Cherry Red vinyl, also available for fans to listen to on CD and digitally. Originally released in 2000, Blood Red Cherry is Gold-certified and was a driving force in Jann winning a JUNO for Female Artist of the Year the following year. Also on January 24, Jann’s 2X Platinum third studio album, Happy? (1997) will be available on vinyl for the first time.

Leading into the holidays, Jann delighted fans across the country last night with JANN ARDEN ONE NIGHT ONLY, a one-hour original special of candid conversation and music, candidly discussing career, family, love and loss that aired exclusively on CTV and streams on Crave, beginning Friday, December 6. Produced by Bell Media Studios, the special was filmed in front of a live audience on November 26 at the Great Hall in Toronto. Songs appearing in the special included “Insensitive,” “The Devil Won,” “The Christmas Song,” and “Good Mother.” JANN ARDEN ONE NIGHT ONLY will also air December 15 and December 25 at 10pm ET/PT on CTV.

Jann’s critically-acclaimed MADE-in-Canada comedy series, JANN, wrapped production on its second season last month in Calgary. The series is set to return to CTV in 2020 as part of CTV’s mid-season schedule. THE JANN ARDEN PODCAST is available weekly on iHeartRadio Canada and everywhere podcasts are found.

Jann Arden is a singer, songwriter, broadcaster, actor, author and social media star. The celebrated multi-platinum, award-winning artist catapulted onto the music scene in 1993 with her debut album, Time for Mercy, featuring the hit single “I Would Die for You”. A year later she had her international break-out hit “Insensitive.” She has written four books, the most recent being the Canadian bestseller Feeding My Mother – Comfort and Laughter in the Kitchen as My Mom Lives with Memory Loss. She is much in demand as a public speaker, and a favourite frequent guest on CBC’s Rick Mercer Report and a guest host on CTV’s The Social. Jann’s most recent studio album These Are the Days, produced by Grammy Award winner Bob Rock, was released in March 2018.