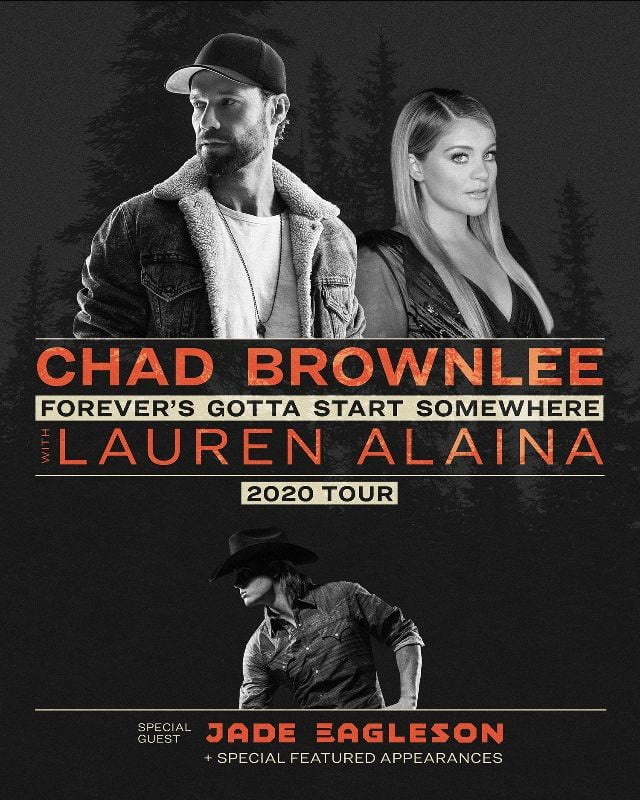 Beginning in London Ontario on March 25th, this leg of the tour will hit seven Ontario cities with Brownlee’s largest and most explosive production to date.  His two-song guest appearance on the record-breaking “Friends Don’t Let Friends Tour Alone Tour” gave country music fans nationwide a taste of the infectious energy, and vocal acrobatics that overflow out of Brownlee every time he hits the stage.  Adding one of the best vocalists that the country genre has ever seen, in Lauren Alaina, and the rich and timeless country vocal of Jade Eagleson to Brownlee’s soaring melodies, and powerhouse vocal chops is sure to leave country fans speechless.

The Fall 2020 Western Canadian portion of the tour will be announced on August 25, 2020.
“I don’t think I’ve enjoyed performing these songs more than I do right now, and can’t wait to get on that stage and hear all of you sing them back in 2020,” says Chad Brownlee. “Along with Lauren Alaina and Jade Eagleson, I’m excited to finally hit the road on my own tour!! It’s going to be a show you’ve never seen before.”

A modest and humble Canadian country music artist from British Columbia, Chad Brownlee has the kind of drive and determination that legends are made of. In the company of his beloved dog Ellie, the soft-spoken country star has spent the past few years pondering life in his cabin near the ocean nestled among the trees where he is confronted by the wilderness around him. It is the warmth of the woodsman lifestyle without any distractions that lets him ruminate over love and life. Deep in the backwoods is where he finds his centre by brooding over love, loss and family with a heartwarming vulnerability that he unearths as age and experience makes him wiser, stronger and more resilient. The outdoors animate his clever tunes and melodies, which he writes on both the guitar and piano, alternating depending on his impassioned whims.

In June 2019, Brownlee delighted fans with the release of a new EP, “Back In The Game”. To mark the EP release, Brownlee shared a new music video for the upbeat, summertime track, “The Way You Roll”. The EP includes previously gold certified released singles, “Dear Drunk Me” which was his first ever Top 5 single on the Canadian Country music charts, and “Forever’s Gotta Start Somewhere”, which hit #1 on the Canadian Country music charts. In the Spring of 2019, Chad became only the second domestic-signed artist ever to be featured on “Hot Country” (world’s largest country playlist) elevating his overall global streams to over 59 Million. “The Way You Roll” recently became Chad’s third consecutive Top 5 single at Canadian country radio, and is well on his way to becoming his third GOLD certified record in row.

The ruggedly charming country singer’s raw talent mixed with heartbreak inspires his pop, country and rock sound. His polished and infectious music leaves his past behind with an honest and deep-rooted authenticity while the sincerity of his songwriting is captivatingly grounded in the discomfort and distress of certain endings and specific goodbyes.

Once a Vancouver Canucks draft pick, now a critically acclaimed country music star, Chad Brownlee is no stranger to the country music world. Brownlee first entered the limelight with the release of his self-titled debut album in 2010 which features fan-favourites “Hood Of My Car” and “Carried Away”. 2011 saw Brownlee winning the CCMA Rising Star Award, lifting him into the upper echelons of the Canadian country music scene. This led him to his albums “Love Me Or Leave Me” in 2012, where he then celebrated the successful release of his sophomore album by hitting the road with Grammy-nominee Dierks Bentley across Canada. Brownlee continued to build on this momentum by building one of Canadian country music’s most passionate fan bases through his next two albums – “The Fighters” (2014) and “Hearts on Fire” (2016). His catalogue of albums contains a plethora of fan-favourites and radio hits like “Love Me Or Leave Me”, and recently gold-certified “I Hate You For It” – proving the steady stream of love for Brownlee’s sound and words. Brownlee holds numerous accolades including a highly coveted JUNO nomination for Country Album of the Year, and consecutive Canadian Country Music Association Award nominations for Male Artist of the Year (2012, 2013, 2017, 2018), Fan’s Choice Award (2017, 2018), Album of the Year (2016) amongst many more.

As his passion for music, art, sport and philanthropy run deep Brownlee habitually donates his time to a variety of causes close to his heart and continues to participate in charitable benefits across Canada and the US. His annual charity “Boys of Fall Golf Tournament” which he started with fellow country artist Dallas Smith in 2013, has raised over $800,000 for Basics for Babies, a branch of the BC food bank.

Lauren has received multiple nominations for the ACM Awards, CMA Awards, CMT Music Awards, Teen Choice Awards, Radio Disney Awards and Billboard Music Awards including taking home last year’s ACM New Female Vocalist of the Year Award and CMT Collaborative Video of the Year Award for “What Ifs,” the 4x Platinum-selling No. 1 hit with childhood friend, Kane Brown. Lauren is one of CMT’s Next Women of Country and she received her very first CMT Music Award for Breakthrough Video of the Year with her No. 1 hit “Road Less Traveled.”

The “sassy Southerner with killer pipes” (PARADE) has shared the stage with superstars including Alan Jackson, Blake Shelton, Carrie Underwood, Luke Bryan, Martina McBride and Jason Aldean, as well as headlining her own shows including her recent U.K. tour with sold-out shows in Manchester, Bristol and Glasgow. Lauren heads out in January on her own headlining That Girl Was Me Tour.

At just 25 years of age, Jade Eagleson’s voice takes listeners back to the days of Johnny Cash, George Jones and Randy Travis, in that it’s unmistakably country.

In August 2017, Eagleson was crowned the winner of the Boots & Hearts Emerging Artist showcase, beating out a lengthy list of other talented artists. Following the victory, Jade signed with Universal Music and went on to record his debut, and now certified Gold, single, “Got Your Name On It”. The song garnered over 41 million global streams and peaked at #6 at Canadian Country Radio. Shortly after the song’s music video was released, Jade was featured as YouTube Trending’s ‘Artist On The Rise’ and appeared on the website’s homepage, which is the first time a Canadian-signed artist in any genre received such an honour. As a result, the music video for “Got Your Name On it” was streamed as much as half-a-million times in a 24-hour period and now has 10x more views than any other Canadian Country Music Video released in 2018.

Jade currently has over 53 million global streams after only 3 songs released to streaming services and 2 singles released to radio. Since the success of his first EP, Jade has released a new two pack which includes country anthem, “Good Country People” and the title track and third single “Lucky”. With new music and more shows ahead, be sure to check out jadeeagleson.com for the most up-to-date information on this young star in the making.