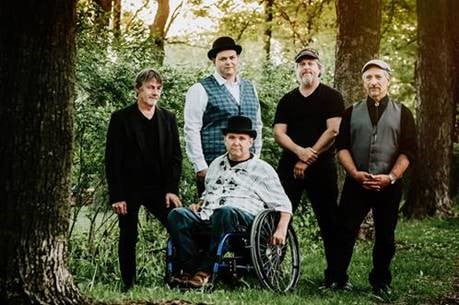 Canadian folk and roots outfit Durham County Poets have received their first JUNO Award nomination, up for Blues Album of the Year at the 2020 JUNO AWARDS this Sunday, March 15.

The nod comes for the band’s fourth and newest release, Hand Me Down Blues — their celebration of all things blues and the artists that inspired their journeys to the stage.

As far as introductions to a genre go, Durham County Poets frontman and lead vocalist Kevin Harvey’s is especially striking; while front row at a Muddy Waters show in Montreal in 1981, he placed his hand on the legendary artist’s shoe. “Muddy looked at me and winked, as if to say ‘welcome to the blues, son,” Harvey recalls. “I didn’t know I would have a life-altering spinal cord injury three months later that would place me in a wheelchair for the rest of my life. (But) that experience made blues come alive to me.”

Fast forward to 2012 and beyond, and Harvey — along with David Whyte, Neil Elsmore, Carl Rufh and Rob Couture, all hailing from Ormstown, Quebec and its surrounding Chateauguay Valley — have Durham County Poets and previous releases, Grimshaw Road (2017), Chikkaboodah Stew (2014) and Where The River Flows (2012) to show for it.

The five artists — all of whom are songwriters and musicians hailing from a multitude of genres, including gospel and rock — possess an unmistakable joie de vivre while performing together, offering audiences, including at the Rochester Jazz Festival, Ottawa Blues Festival, and Montreal’s Folk Festival, an infectious good-time vibe through song.

“The band and I, we have our own experiences and inspirations to create this dedicated ‘blues album’, paying homage to our favourite blues artists,” Harvey adds. “Muddy Waters was just one of many who handed the genre down to us, and now we want to continue in that tradition by putting our own stamp on it and “Hand” the blues to the next generation.”

Hand Me Down Blues  is available now.