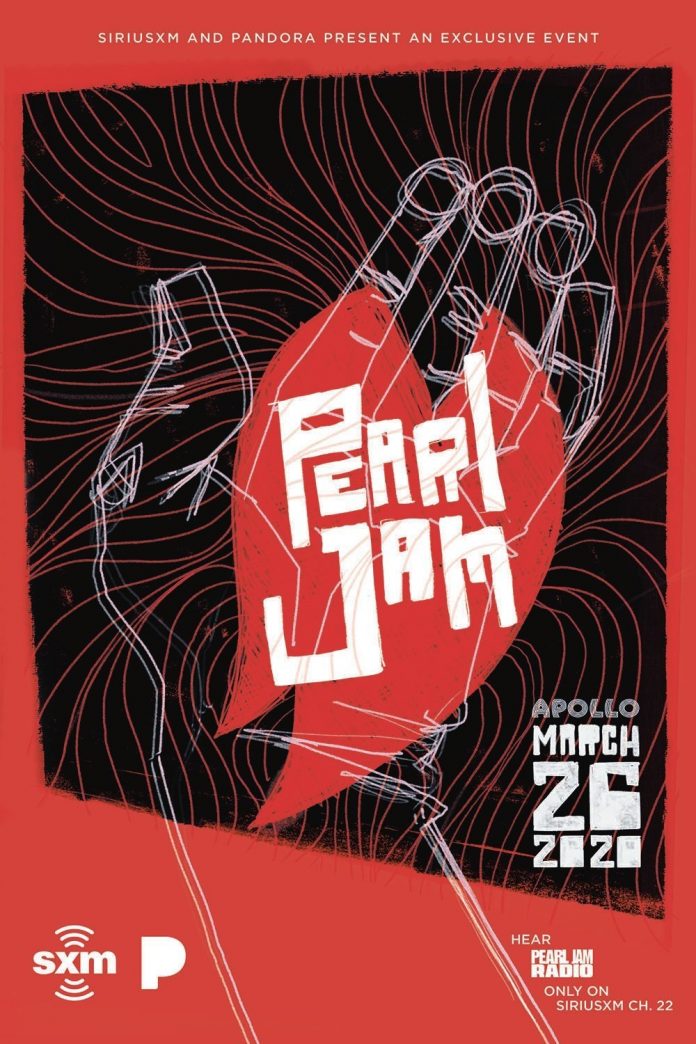 The exclusive concert marks the first time that Pearl Jam has performed at the iconic venue and their first concert in New York City in almost three years. The special event comes days before the band embarks on the U.S. leg of their Pearl Jam 2020 tour. The concert will take place just hours ahead of the release of the band’s new album Gigaton, which goes on sale at midnight.

Concert will air live nationwide on the band’s dedicated channel, SiriusXM’s Pearl Jam Radio channel 22, now in its 10th year on SiriusXM. Directly following the live concert, Pearl Jam Radio will broadcast and premiere the new album in North America.  Upon the album’s release, Pandora will release both a new Pearl Jam Live: A-Z playlist, which will include some of the band’s greatest live performances, and a Pandora Story, where the band will share insights and stories about their new music and iconic songs.

“We are incredibly humbled and honored to take the stage at the legendary Apollo Theater,” said Stone Gossard. “We look forward to a memorable show to celebrate Gigaton and the 10-year anniversary of Pearl Jam Radio at SiriusXM. It’s hard to understate the sacred and historical importance of the Apollo to the history of American popular music and African Americans’ preeminent role in its invention. We will play this special one time show with those artists in mind.”

Pearl Jam will release their much-anticipated eleventh studio album, Gigaton, on March 27, just hours after their special concert at the Apollo Theater. Gigaton marks the band’s first studio album since their GRAMMY award-winning album, Lightning Bolt, which was released over six years ago.  Gigaton is available for pre-order now at www.pearljam.com. In support of Gigaton, Pearl Jam will embark on their first leg of North American tour dates in March and April.

SiriusXM has had a long-standing relationship with Pearl Jam, having created a full-time music channel with the band, Pearl Jam Radio, in 2010, which features archival concerts throughout the band’s 30-year career, rarities, unreleased material from the band’s personal music library and music from the band’s side projects, including solo and pre-Pearl Jam music.

The legendary Apollo Theater—the soul of American culture—plays a vital role in cultivating emerging artists and launching legends. Since its founding the Apollo has served as a center of innovation and a creative catalyst for Harlem, the city of New York, and the world. For more information, visit www.apollotheater.org.

SiriusXM subscribers will have numerous opportunities to win a pair of tickets to this private SiriusXM & Pandora performance, including on-air on Pearl Jam Radio, via e-mail to qualified subscribers who have consented to e-mail marketing from SiriusXM and who have registered their music interests with us at siriusxm.com/perks. Pandora fans will have a similar opportunity based upon their listening histories. Additionally, SiriusXM subscribers since January 22, 2020 will be able to enter for the chance to win a trip for two to New York, NY including airfare, hotel stay, and a pair of tickets to SiriusXM & Pandora Present Pearl Jam at The Apollo Theater. See Official Rules for complete details at siriusxm.com/PJApollo.