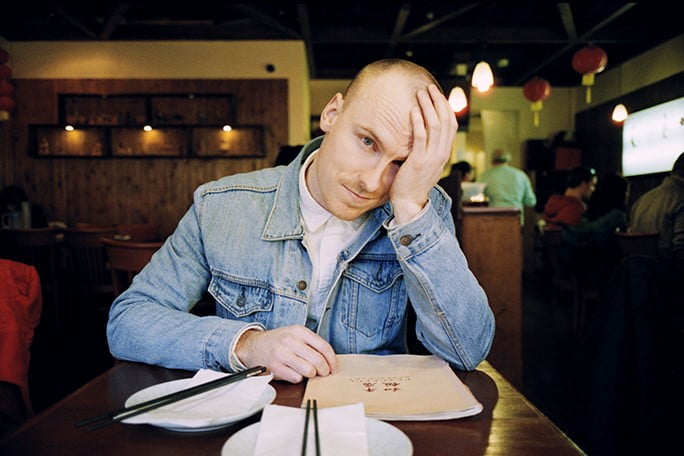 When it comes to describing the indie-folk undertaking that is Canadian artist Noble Son — aka Adam Kirschner, singer/songwriter, actor, and VFV (very familiar voice) — his new single “Sad Dumb Lovesick Young Kid,” and album Life Isn’t Fun, here’s what others have to say:

“There is a dichotomy buried deep in the musical well that is Noble Son: the brutal heartbreak of reality and the bounding absurdity of life itself,” says BeatRoute. “His romanticism is all wrong according to feel-good rules — where love fails, politics prevail, that sort of thing — but maybe that’s why his music makes us hurt so good.

“It’s impossible to speak of his work without also exclaiming about the other component of Noble Son: an uncanny Jim Carrey-esque persona. All the roiling energy in that creative well of the artist also expresses itself through comically brilliant physicality.”

“When we think of folk music at a glance, visions of somber men and women standing emotionally with their guitars often comes to mind,” Citrus Magazine concurs. “Noble Son is quite the opposite.

“Kirschner confronts and criticizes his genre for being too serious, which is pretty obvious for anyone who’s seen him live. Perhaps life is a bit more of a playground than we give it credit, and it’s time for the sad boy musician trope to be a thing of the past. Through storytelling, Kirschner reminds us that we are allowed to have fun, even in times of uncertainty and political unrest.”

Between long, isolating winters during his Northern Canadian upbringing, and inspiration mined from themes of anxiety, self pity, obsessive joy, and rage, Kirschner’s uniquely eruptive songwriting and displays of sonic inventiveness walk the line between subtly endearing and unbridled animalism.

Adam Kirschner is an internationally recognized voice actor, having backed cartoons and commercials for brands such as Porsche, Disney, Bud Light, My Little Pony, the Vancouver Canucks, and more. He’s also an accomplished television and film actor, and has been seen on shows such as CW’s iZombie and the upcoming Hulu original series, Woke.