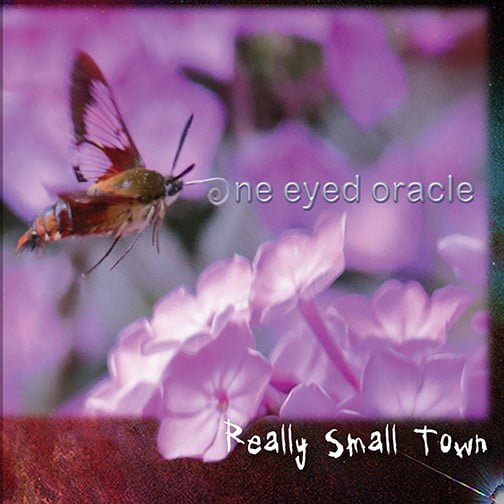 The ‘Town’ may be ‘Really Small,’ but the ground covered is vast: the brainchild of singer/songwriter and multi-instrumentalist Boris Rene Buhot, One Eyed Oracle’s premiere album ushers a multi-genre odyssey with sounds of heavy alt rock, explorative pop — not to mention influences of eastern European folk and Island reggae.

The ultimately danceable release is also politically charged, created — according to Buhot — with “the intent of stirring an unsuspecting public, one that’s strung up by class and form, to the greater aspect of our parts hidden beneath the waves of our unconscious mind.”

Between the two — and the album’s remaining seven songs — Buhot worked tirelessly with co-producers Diamond Award-winning Jeff McCulloch (Wellesley Sound Studios) and Musicians Institute of LA alum Matt O’Rourke on percussion, to affirm: “Love doesn’t just make the world go ‘round, it holds it together.”

“You have no idea what you will find until you look within,” he adds.

That’s just what Buhot drew on, and more; it was a deeply personal handful of perspective-altering experiences that helped shape Really Small Town. “At an early age, I saw the ghostly-shadow of a fully grown bear, standing on its hind legs with both paws outstretched high over its head,” he recalls. Another: “As a child, a branch I held strongly reacted toward an underground stream and twisted in my palm. The pain from the friction stuck in my memory until I realized: water plays a song and all life is tuned to its frequency.“

“Recently, I heard the words ‘one eyed oracle’ spoken into my waking conscious mind.

“All in all, I’ve always kept an open tuning to all naturally unexplained phenomena.”

The sentiment resonates strongly among those who’ve had an early spin of Really Small Town… “One Eyed Oracle is a formidable tunesmith whose lyrics, like his somewhat heavy-mooded musical delivery, is direct, visceral, and resonant,” says TorontoMoon.ca’s, Gary 17. “Alternating between the grunge folk vibe and what you might call ‘stark rock,’ his songs punch through any film of complacency that might be obscuring your vision, presenting boldly and plainly the plight of the modern human.”

If Really Small Town fails to fit in one genre category, that means it has succeeded in bringing to life Buhot’s creative ethos and energy. “I used to tape songs every Thursday night during CFNY’s Top 30 Countdowns to learn new songs on bass,” he recalls. “They were the first radio station to broadcast punk and new wave in Toronto.”

“This thirst for new music led me to places like Nuts n’ Bolts and The Domino Club where I was exposed to carefree people ‘dancing’ with themselves.”

“They didn’t fit into any of the stereotypes I’d seen before,” Buhot continues. “That became the ‘primordial stew’ whose metamorphosis imprinted deep within my songwriting.”

The fruits of which can be heard now on Really Small Town — available now.