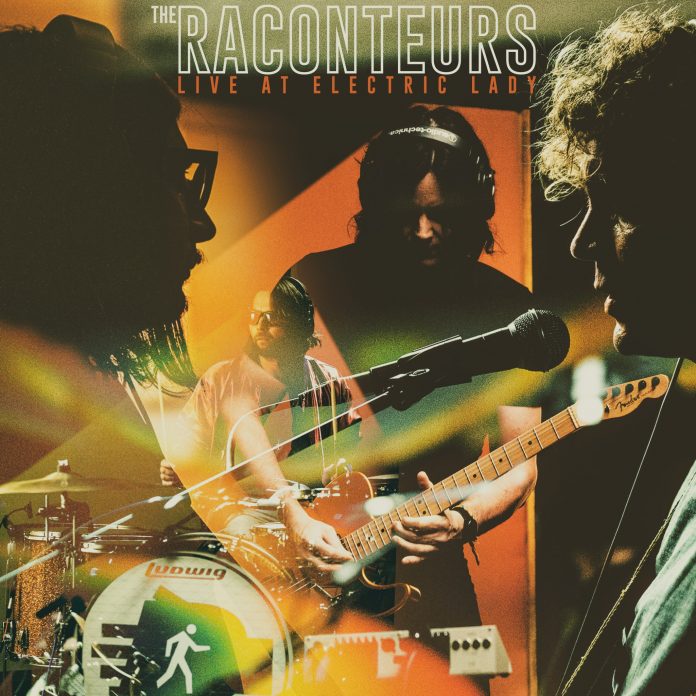 Furthermore, THE RACONTEURS PRESENT LIVE AT ELECTRIC LADY, THE ENHANCED ALBUM will be visually enhanced with a number of Spotify Canvas and Storylines incorporating never-before-seen video footage from the event. Highlights include Jarmusch’s exclusive interview with The Raconteurs as well as a behind-the-scenes look at the recording of “Blank Generation,” featuring a special visit from original Voidoids guitarist Ivan Julian explaining the song’s instantly identifiable guitar hook to the band.

“I’ve always loved that guitar part and never really sat down and exactly figured out what he’s doing,” says Jack White. “How amazing for Ivan to show up and show us how to do it.”

As if all that weren’t enough, LIVE AT ELECTRIC LADY is accompanied by a full-length one-hour documentary, streaming now via YouTube.

HELP US STRANGER, the acclaimed third studio album from The Raconteurs, debuted at #1 on the SoundScan/Billboard 200 upon its June 2019 release – the band’s first-ever #1 and third consecutive trip to the top 10. The album also debuted atop the Physical Albums chart and as well as the Vinyl Albums chart. In fact, HELP US STRANGER garnered the sixth highest first-week vinyl sales in the SoundScan era (with Jack White holding the #1 and #4 spots for LAZARETTO and BOARDING HOUSE REACH, respectively). The album was also the first #1 for an independent record company in 2019 and the fourth consecutive Billboard #1 for Jack White as an artist. In addition to its chart-topping achievements here in the United States, HELP US STRANGER also debuted at #1 on the album sales chart in Canada and #2 on the overall Canadian album chart. The success continued in the UK where the album took the top spot on the UK vinyl chart, along with being the #3 independent album and #8 on the Official UK Albums chart. HELP US STRANGER is available physically and digitally worldwide.