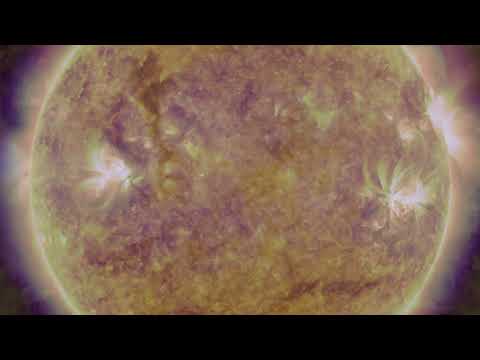 Advances in science and technology have revealed that the universe is not silent: the stars produce infrasound acoustic waves which can be recorded, though the human ear cannot perceive them.

These infrasounds were computed by astrophysicist Garik Israelian in 2005. This unique acoustic library inspired Israelian and Dr. Brian May, astrophysicist and legendary guitarist of Queen, to create a festival to bring together stars and music, and so Starmus was born.

Many art and science projects were inspired by Starmus. Thus, in 2016 Nobel Prize winner Kip Thorne and Oscar winners Hans Zimmer and Paul Franklin created the concert “The Warped Side of the Universe”, reimagined and extended in 2019 under the title “Once Upon a Time on the Moon” with the added participation of Brian May, Rick Wakeman and Steve Vai to celebrate the 50th anniversary of Apollo 11’s Moon landing.

Today Starmus announces the result of another art-science project involving Dr Israelian, Brian Eno, Paul Franklin, Oliver James and DNEG, the “Starsounds” project. It is based on Dr. Israelian’s lecture “Our Acoustic Universe” published in the book “50 Years of Man in Space” (lectures of Starmus I, 2014). Brian Eno arranged the acoustic waves from Dr. Israelian’s library into a new composition by speeding them up so that they could be heard. Then Paul Franklin and Oliver James of DNEG, the world-leading Oscar winning visual effects studio, created images based on the star waveforms and images of our Sun. “Starsounds”, a hypnotic piece with complex harmonies and mesmerising visuals, is being made available on the internet for the first time – finally, we can listen to the stars and both see and hear the music that they make!