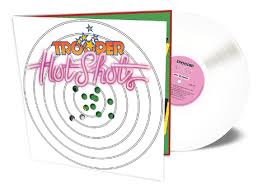 Universal Music Canada announces the upcoming reissue of Hot Shots, the 1979 greatest hits record by the legendary JUNO Award-winning Canadian rock band – and one of Canada’s top-selling bands of all time – Trooper. The six-time platinum compilation album will be remastered and released July 17, 2020 on 180-gram white vinyl via Universal Music Canada, the country’s leading music company.

Produced by Canadian music icon Randy Bachman, Hot Shots features greatest hits culled from the band’s first five studio albums. When Hot Shots was originally released, it broke all records for Canadian sales of a Canadian album and has achieved more than sextuple platinum sales in the years since.

In conjunction with the band’s 45th anniversary year, Hot Shots will be reissued on limited edition 180-gram white vinyl with newly mastered audio and faithfully restored original artwork that has been housed in a gatefold complete with the original die-cut jacket.

Vocalist Ra McGuire and guitarist Brian Smith have been performing together since 1965 and are the founding members of Trooper. The band released their first album in 1975 and, 45 years and 11 albums later, have achieved numerous landmark successes including 6X platinum certification, a Juno Award for Group of the Year, and the SOCAN National Achievement Award. Trooper – often dubbed “Canada’s greatest party band” – remain one of the most in-demand touring bands in the country.