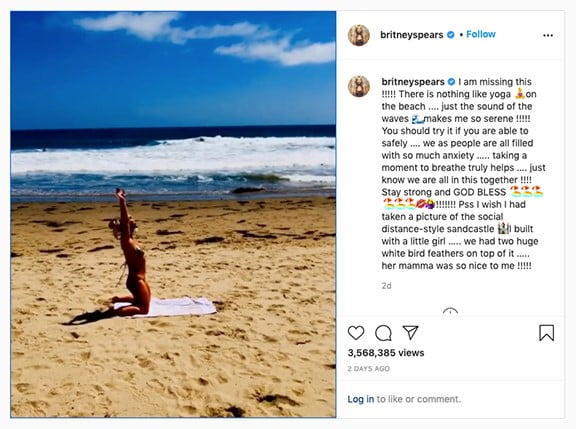 No “Oops!” here: Britney Spears has done it again and added another one of award-winning, multi-platinum and gold-selling Toronto artist, composer and producer Jesse Cook’s songs to one of her video posts on Instagram.

The recent post features the popstress on the beach doing yoga, revelling in the sound and sights of the waves, all while Cook’s fiery flamenco tune, “Cafe Mocha,” loops on the overlay.

This is the second time Spears has featured one of Cook’s songs on her Instagram posts, which she then dispatches to her some-25 million fans on the platform.

“I’m flattered,” the Toronto-based artist says. “I love that she keeps posting my music. We’re clearly in very different music genres, and it’s pretty cool when a big pop icon like Britney starts posting your songs.”

The respect for each other’s sound is mutual, with Cook’s favourite track by Spears being “Toxic.” “I loved that song,” he says. “The production was fantastic!”

This isn’t Cook’s first brush with Insta-stans from the ultra-pop circle: “This is a bit like last year when Shawn Mendes started following me on Instagram. Suddenly I had a huge spike in interest from 13-year old girls.

“I think they were disappointed when they realized I didn’t have any photos of Shawn to post,” he jokes. “Eventually, it tapered off.”

Maybe no Mendes, but Cook has lots to share to when it comes to his inimitable accomplishments, including — but not limited to — ten gold and platinum studio albums with combined sales exceeding two million copies, five concert DVDs and live discs, five PBS specials, multiple awards including a JUNO win, 11 nominations, three Canadian Smooth Jazz Awards, a Gemini Award, and an Acoustic Guitar Magazine Player’s Choice Silver Award — plus thousands of concerts around the world over and above millions of views and streams across platforms.

He recently celebrated the 25th anniversary of his breakout release, Tempest, with a 2020 version of “Tempest” — “Tempest 25.”

“If you had asked me at age 22, I would have said I would never, never make music for the public,” Cook laughs. “Well… It turns out I did the thing I said I’d never do, and somehow it’s worked out.