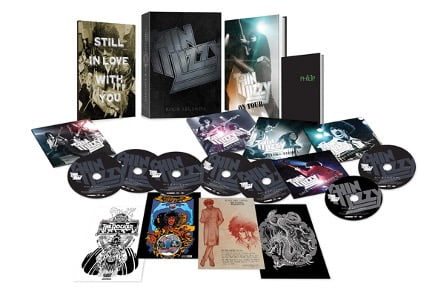 To celebrate 50 years of Thin Lizzy, Universal are proud to announce the first installment of an archive release programme that will cover the career of one of the most iconic and respected bands of the 1970s.

Rock Legends is a six CD one DVD Super Deluxe Edition that features 99 Tracks in total, 74 of which are unreleased and 83 of which have never been released on CD or streaming. It is simply the ultimate Thin Lizzy boxset.

Rock Legends covers the bands whole career over 6 discs newly mastered by Andy Pearce encompassing a raft of unreleased material including demos, radio sessions, live recordings and rare single edits. The track listing has been compiled by Thin Lizzy guitarist Scott Gorham and Lizzy expert Nick Sharp from a collection of newly discovered tapes most of which have never been heard before.

The box is housed in a 10” x 6” slipcase and in addition to the six CDs contains a DVD with the hour long ‘Bad Reputation’ BBC documentary and the band’s legendary performance on the Rod Stewart ‘A Night on the Town’ TV Special from 1976.

The set also contains replicas of the bands tour programmes bound into a hard-backed book, the very sought-after Phil Lynott Poetry books, 4 prints by legendary Lizzy cover artist Jim Fitzpatrick and a book containing quotes by all the members of the band about their experiences playing with Phil Lynott and Thin Lizzy. It also has a selection of famous fans such as Slash, Lemmy, Joe Elliot, Geddy Lee, James Hetfield, Ian Gillan, Henry Rollins, Billy Corgan, Bobby Gillespie, Craig Finn, John McEnroe and Pat Cash talking about the band.

CD ONE: The Singles

Never before commercially released 60-minute documentary made by Linda Brusasco and first broadcast on BBC4 in September 2015.

Thin Lizzy are unquestionably one of the true icons of British rock. Nobody has ever sounded like them, yet they have influenced countless others.

Phil Lynott’s poetic lyricism, the unmatchable dual guitar precision, the ability to joust with epic melodies and make them memorably intense, all of this is part of the Lizzy heritage. And what they have left behind is peerless, powerful and influential. The invocation of an era, the evocation of timeless music.

It all began in 1970 when Lynott (bass/vocals), Eric Bell (guitar), Brian Downey (drums) and Eric Wrixon (organ) got together in Dublin. Wrixon left shortly after the band had recorded their first single ‘The Farmer’.  By the end of 1970 they’d signed to Decca Records, and released their self-titled, debut album in 1971. This record was swiftly followed the next year by second album ‘Shades of A Blue Orphanage’. Neither record charted but did showcase a band that were finding their own style.

However, early in 1973, Lizzy had their first hit single, when their version of the traditional Irish song ‘Whiskey in The Jar’ reached number six in the UK, as well as topping the chart in Ireland. Later the same year, ‘Vagabonds of The Western World’ came out as their third album. Although it failed to chart nonetheless, it proved there was something unique about what they were doing. Much to everyone’s surprise, Bell quit on New Year’s Eve 1973 and Gary Moore temporarily rejoined to help the band finish their tour, which ran into ’74.

There was to be a further shake-up, though. The band portentously decided to expand the line-up to a four-piece, with Scottish teenager Brian Robertson and American Scott Gorham both coming in on guitar. They also changed labels, signing to Vertigo. Their fourth album, ‘Nightlife’, came out in late 1974; it also featured Moore playing lead guitar on ‘Still in Love with You’.

While the much-needed album commercial breakthrough still eluded them, it was finally achieved in 1975, when ‘Fighting’ made it to number 60 in the UK. And more importantly, the unmistakable sound that we now associate so closely with Lizzy was beginning to take shape. And we headed the second half of the ’70s, the band were poised for their big break.

Sure enough, their 1976 album ‘Jailbreak’ proved to be the moment that Thin Lizzy arrived as a magical, unstoppable force. All the ingredients were now in place and the album stormed to number 10 in the UK and number 18 in America. Moreover, the supreme anthem ‘The Boys Are Back in Town’ was a transatlantic hit single. It got to number eight in Britain and number 12 in the States. The album’s title song was also successful as a single, reaching number 31 in the UK.

Unfortunately, an American tour in June ’76 with Rainbow had to be cancelled when Lynott contracted hepatitis, but they were soon back on track when the album ‘Johnny The Fox’ came out in late ’76. It peaked at number 11 in Britain and made it to number 52 Stateside. And the single ‘Don’t Believe A Word’ put them back in the UK Top, as it reached number 12.

A planned US tour in December 1976 had to be cancelled when Robertson suffered a hand injury. Moore was brought back for a subsequent American tour early in 1977, as Lizzy opened for Queen. And the band recorded their next album ‘Bad Reputation’ with Gorham commandingly handling the guitar parts. But Robertson did return in time to contribute lead and rhythm guitar parts as well as keyboards.

Lizzy headlined the Reading Festival in August ’77, and a month later the new album was released. It reached number four in the UK and number 39 in the States, with the single ‘Dancing in The Moonlight (It’s Caught Me In The Spotlight)’ again making the Top 20 in Britain, reaching number 14.

In 1978, the band released ‘Live and Dangerous’ which is rightly regarded as one of the all-time great live albums. The album reached number two in the UK but Downey had to miss tours later in the year due to illness, with Mark Nauseef being temporarily brought in. More importantly, Robertson was replaced by Moore, and this time the latter stayed for the recording of the next album ‘Black Rose: A Rock Legend’. This was released in 1979, making it to number two in Britain and number 81 in the States. There were three UK hit singles from it as well, namely ‘Waiting for An Alibi’ (#9), ‘Do Anything You Want To’ (#14) and ‘Sarah’ (#24).

Moore left the band once again after they played in Oakland at the Day on The Green Festival in July 1979 and with only a couple of days notice Ultravox’s Midge Ure filled in for the remaining tour commitments. Dave Flett was added as another guitarist later in the year, to allow Ure to play keyboards when required.

Snowy White, who had played live with Pink Floyd, was chosen as the band’s new permanent guitarist, with teenager Darren Wharton drafted in on keyboards. The new line-up released the album ‘Chinatown’ in late 1980, which got to number seven in Britain and number 120 in the US. The title track peaked at number 21 in the UK, with ‘Killer on The Loose’ doing even better, reaching number 10.

A year later, ‘Renegade’ made it to number 38 in the British album charts, with the UK single ‘Hollywood (Down on Your Luck)’ reaching number 53. Three months earlier, the band had created history by being the first to headline the first ever show at Slane Castle in Ireland on August 16.

In August 1982, White left Lizzy, and former Tygers Of Pan Tang man John Sykes was brought in for the next album, ‘Thunder and Lightning’. This record had a heavier sound than was usually associated with Lizzy, but when put out in March 1983, it had a massive impact, reaching number four in Britain. The single ‘Cold Sweat’ made it to number 27 in the UK, while the title track reached number 39 and ‘The Sun Goes Down’ peaked at number 52.

A live album, ‘Life’, came out in October 1983 and reached number 29 in the UK but the band had already split up the previous month after playing at the Monsters of Rock Festival in Nuremburg on September 4; their final British performance was a headline slot at the Reading Festival, on August 28.

On January 4, 1986, Lynott tragically died, at the age of 36. It shattered any chance for a full Lizzy reformation. However, in 1996, the band were reactivated as a formidable live concern. Since then, they’ve delivered a stunning celebration of the Thin Lizzy heritage. Not only have former members Gorham, Downey, Sykes and Wharton been involved, but a rich cavalcade of rock luminaries has also been keen to add their talents. Ricky Warwick has done a magnificent job on vocals, while among others to perform with them over the past two decades are bassists Tom Hamilton (Aerosmith), Troy Sanders (Mastodon) and Marco Mendoza (Ted Nugent, Whitesnake), drummers Tommy Aldridge (Whitesnake, Ozzy), Scott Travis (Judas Priest) and Ian Haugland (Europe), plus guitarists Vivian Campbell (Def Leppard) and Richard Fortus (Guns N’ Roses). The fact such high-profile names have been delighted to play a role in commemorating the history of Thin Lizzy underlines the indelible impact it’s had on succeeding generations.

What this band have left behind is remarkable. They have inspired the likes of Metallica, Jon Bon Jovi, Alice In Chains and countless others, and their legacy has become more vital with each passing year. Legend is a ridiculously overused term these days, but in the case of Thin Lizzy it’s inadequate, you just have to listen to their music, it’s still timely and era defining.