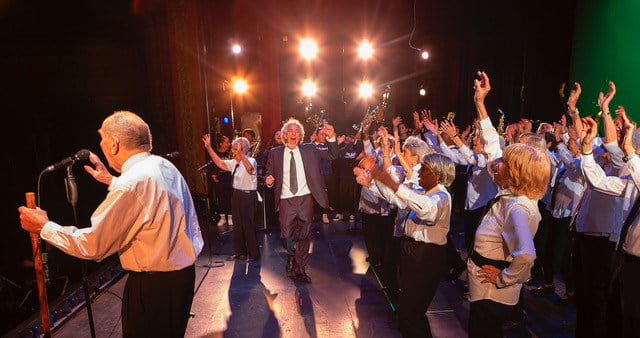 The Massachusetts-based rock group, subject of the smash Fox Searchlight documentary Young@Heart, will release “A Change Is Gonna Come,” a cover of the Sam Cooke classic, featuring Chicago Children’s Choir. The song is one of seventeen unforgettable tracks featured on the group’s upcoming album Miss You, which will be released on October 2, 2020.

With their first album since 2012, Young@Heart puts its unique stamp on songs from legendary artists such as Bob Dylan, Aretha Franklin, The Rolling Stones, NWA, and Pearl Jam. On October 3, fans worldwide can join Young@Heart for a virtual album release event and benefit concert that will feature performances, music video debuts, celebrity guest appearances, and more!

As an ensemble of senior citizens performing classic and contemporary hits, Young@Heart has been celebrated worldwide as a truly inspirational force, especially during these challenging times. Their energy and charisma show fans that it’s possible to grow old without growing boring. Unwilling to be shut away in nursing homes, Young@Heart had been touring the world since 1982, performing sold out concerts, and singing unexpected interpretations of popular music from The Clash, Jimi Hendrix, Sonic Youth, and Coldplay.

Unfortunately, the onset of the COVID-19 pandemic has affected Young@Heart’s ability to tour, perform or rehearse together in person. With an average age of 85, its members are among the most at risk from COVID-19, and therefore this will be one of the last groups to perform in public due to the high risk of infection. One member is recovering from a 14-day hospitalization after contracting COVID-19.

Undeterred, Young@Heart refocused its energy in 2020 under the “new normal.” What began with an audio conference call in March, and a Zoom rehearsal a week later, blossomed into twice weekly virtual rehearsals and online collaborations with the renowned Chicago Children’s Choir and the Barton Hills Elementary Chorus from Austin, Texas, best known for their unique interpretations of Grateful Dead songs. The two choruses joined forces remotely to sing Simon & Garfunkel’s “Bridge Over Troubled Water.”

This has all set the stage for the release of their fresh new album, Miss You, which will arrive on October 2.