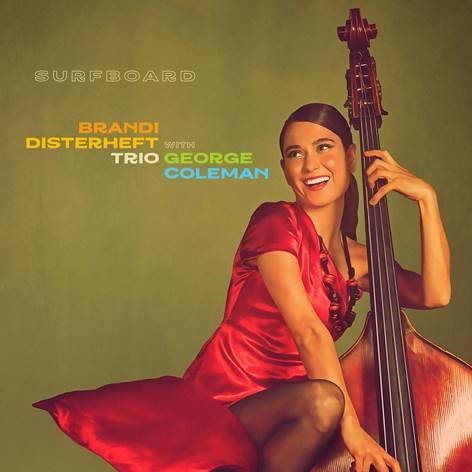 Award-winning Canadian jazz contrabassist, singer and composer Brandi Disterheft and her Trio ride the wave of exploring bossa nova in a contemporary light with the release of her new single and video “Surfboard” — available now!

The title track from her forthcoming album, Surfboard — set for release October 2020 via Justin Time Records — the single and its surrounding body of work are touted among Disterheft’s most accomplished yet. Joined by two octogenarian masters — virtuoso tenor saxophonist George Coleman and the definitive Brazilian drummer Portinho — and world-class pianist Klaus Mueller, Disterheft authoritatively and organically guides the flow on a varied program that reflects her capacious interests.

On “Surfboard,” most notably, the artists nothing short of shine with their slick vignette arrangements and fitting homages to composer and co-creator of bossa nova Carlos Jobim, and bassist Sam Jones throughout. Inspired by documentary tandem surfing footage for the video, Portinho shines his signature groove on this pull from the Brazilian Songbook Standards with unrivalled finesse.