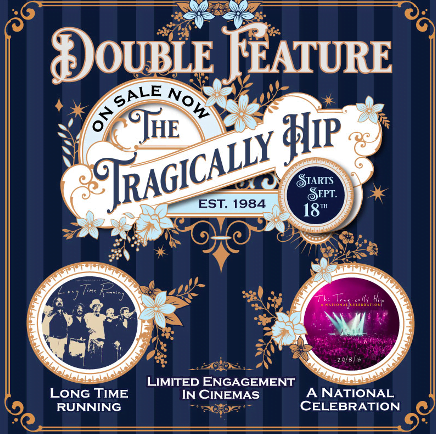 Today legendary Canadian icons The Tragically Hip announced that a special double feature of their celebrated films, Long Time Running and A National Celebration, will screen at select Cineplex Theatres across Canada. For the first time ever, starting on September 18th, fans across the country will have the chance to take in both titles at Cineplex Cinemas. A full list of Cineplex Cinemas presenting The Tragically Hip: The Ultimate Double Feature is below.

To commemorate the special double bill exclusive merchandise has been created and is available to purchase. Merchandise is available HERE and includes a reprint of the original Kingston concert t-shirt.

Long Time Running is a feature documentary film that follows The Tragically Hip’s iconic 2016 Man Machine Poem cross-Canada tour up until their final concert in their hometown of Kingston. The film is distributed by Elevation Pictures. A National Celebration was the final show of The Tragically Hip’s Man Machine Poem Tour recorded on August 20th, 2016 at the K-Rock Centre in their hometown of Kingston Ontario. The concert was broadcast nationally on CBC to a record-breaking audience of 11.7 million.

Critically acclaimed for more than three decades, The Tragically Hip has been at the heart of the Canadian musical zeitgeist, evoking a strong emotional connection between their music and their fans that remains unrivalled in this country.  A five-piece group of friends including Rob Baker (guitar), Gord Downie (vocals, guitar), Johnny Fay (drums), Paul Langlois (guitar) and Gord Sinclair (bass), who grew up in Kingston, Ontario, The Hip has achieved the enviable status of a band that enjoys both mass popularity with more than 10 million albums sold worldwide, as well as peer recognition through 16 Juno Awards – and the fourth-most ever for an artist – picking up their last two in for Group of the Year and Rock Album of the Year for Man Machine Poem.  Their studio catalogue includes their self-titled debut album The Tragically Hip (1987), Up To Here (1989), Road Apples (1991), Fully Completely (1992), Day For Night (1994), Trouble At The Henhouse (1996), Phantom Power (1998), Music @ Work (2000), In Violet Light (2002), In Between Evolution (2004), World Container (2006), We Are The Same (2009), Now For Plan A (2012) and Man Machine Poem (2016).  Through their career the band became a cultural touchstone in Canada; receiving the distinguished Order of Canada and even being featured on a set of postage stamps.